In my research, I’ve observed patterns in the past that we still see today.

For instance, in the 1830s, a woman named Maria Monk turned up in New York City. She claimed that she had been held prisoner as a sex slave in a convent in Montreal, where she had been subjected to bizarre tortures and told to sexually serve the priests who entered the convent via an underground tunnel. Any offspring of these unions would be baptized, strangled and disposed of in lime pits.

END_OF_DOCUMENT_TOKEN_TO_BE_REPLACED

Myths take on a life of their own, even if they don’t have any particular foundation. One of them is the idea that the violence of fascism and the Holocaust was the result of sadomasochism, or that the two phenomena have anything to do with each other. We’ve touched on the bit of glib folk-anthropology that Nazis were perverts before, but Moore analyzes more thoroughly than anybody else.

The sexual myths of modernity this book aims to unravel are those which concern masochism as a from of decadent gender subversion, sadism as a fascist return of the barbaric repressed, and current sadomasochism as a legacy of Nazism. They are myths in the sense that their proliferation has been built on poetic assertion, psychoanalytic speculation, and discursive repetition, rather than investigation, reflection or evidential grounding. [Pg.1]

Although no historians have ever attempted to produce creditable evidence that Nazi leaders were any more prone to what we might call sadomasochistic pleasures than any other political elite has been as wartime, this particular sexual myth has show surprising recurrence, persistence and capacity for re-articulation. Consequently, it has also proven to be fuel for a range of taboo sexual fantasies[….] [Pg.9-10]

END_OF_DOCUMENT_TOKEN_TO_BE_REPLACED 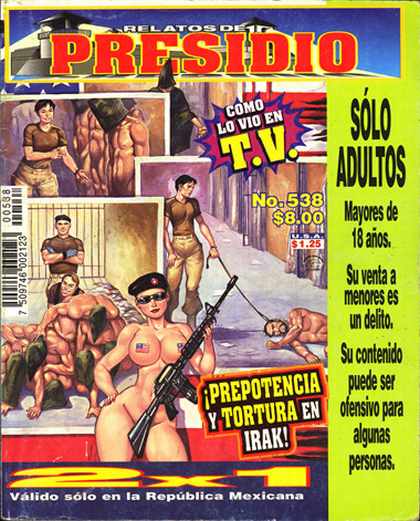 END_OF_DOCUMENT_TOKEN_TO_BE_REPLACED

This image, presumably the cover of an old men’s adventure magazine from the ’50s or ’60s, is puzzling initially. Why the shaving brush and scissors? Guerilla barbers? This is almost certainly a reference to les femmes tondues. In post-liberation France, women who allegedly collaborated with occupying fascists (especially “horizontal collaboration”) were publicly shaved bald. Like the “Nazi dominatrix” trope, this is the conflation of deviant politics (collaboration) with deviant female sexuality (“slut shaming”). Women are used as ritual scapegoats for a community’s problems (in this case, the legacy of occupation and collaboration in France) and symbolically “killed.” See Frost’s book Sex Drives

Interesting to see women-in-danger in the context of anti-fascist, “good guy” forces like the French resistance. This can be applied to just about any conflict, or to put it another way, any conflict or social anxiety can provide a framing narrative for the scene of woman-in-distress.

Well, sooner or later, somebody had to make an image like the one above.

Danny Hellman created this for cover of the 24th issue of the Cinema Sewer zine, published out of Vancouver, BC by Robin Bougie.

It’s not the only Hellman that satirizes the Iraq and Afghanistan war, viewing those conflicts through the lenses of comic books and exploitation magazines (e.g. 1). This is an obvious take on the previously discussed Israeli stalag novels and the later men’s adventure magazines, referencing the notorious Abu Ghraib pictures. The brunette woman in the background represents Lynndie England, for instance.

The Abu Ghraib pictures put Americans in a quandary. The scenario was familiar, but the ones inflicting the suffering were “us”, not “them”. How could this be? This is what Other people do. It’s telling that England, a female soldier, became the most recognizable name and face associated with this scandal, linking political deviance with female sexual deviance.

I feel somewhat disappointed that this image is too knowing, too ironic to be a genuine expression of fantasy. Maybe we need to wait a few years before the psychosocial impact of the War on Terrorism percolates up from the collective subconscious. Or perhaps the torture porn film genre previously discussed is part of that response. Maybe in North America the feared Other is not the Muslim terrorist, but the out-of-control, paranoid police state. That at any second, for no apparent reason, we can find ourselves strapped to something in a windowless room where we are utterly helpless before an unknown person. Network television is already crawling with surveillance and confinement and competition. Somewhere out there, Room 101 is ready for you.

Sylvia Plath wrote that “Every woman loves a fascist” and the Nazi can function as the absolute extreme of the “bad boy”.

A book published by Ellora’s Cave under the Taboo line, Captured by the SS by Gail Starbright, goes deep into this fantasy. From the description:

By the twenty-first century, Germany has all but taken over the world. Only one nation remains untouched…America. Only spies slip in and out of enemy territory. Within this shadowy and dangerous world of cloak and dagger, Isabel Riley is an American spy deep in enemy territory.

Isabel is detained at a German checkpoint by a black-uniformed SS officer. She’s arrested, taken into custody and interrogated.

But she soon learns her enigmatic captor wants more than just her secrets. He enjoys tying her up or teasing her with the tails of his leather flogger. But floggers and video cameras are the least of her concerns. In the eyes of the Third Reich, ownership is real. And a lovely American spy is far too tempting of a war prize to pass up.

Although I haven’t read the book, my response to the description was “Um…”

END_OF_DOCUMENT_TOKEN_TO_BE_REPLACED

Angela Caperton’s blog pointed me towards several Youtube clips from the documentary, Stalags (2008), about the Israeli stalag novels:

A discussion of the standard plot

A publisher talks about the premise of the books, in which a “pinnacle of manhood”, American pilots, are dominated by women.

An interview with present-day Israeli who talks about his fantasies when having sex with a gentile German woman.

I think this is an example of fantasy as a reparative/redemptive rewriting of an earlier experience, either first hand or indirect. Definitely gotta see this one.