END_OF_DOCUMENT_TOKEN_TO_BE_REPLACED

After the war, a generation of men returned home to peacetime. Whether due to awakened homosexuality in the all-male society of the military, or just a distaste for the new American dream of job and family, many of these men created an alternative culture that continued the outdoor homosociality and initiatory experience of military life.

Samuel M Steward describes his early life in S/M before there was a Scene:

…in the 1930s, I had become interested in S/M [….] In those days there were no leather shops, no specialty stores; and leather jackets were unheard of and unavailable except in police equipment outlets that would generally not sell to civilians. I finally found my first one in Sears-Roebuck’s basement in Chicago. And I had unearthed– literally, for his saddlery shop was in a cellar on North Avenue– a little man who braided a few whips for me, and even found a “weveling” Danish cat-o’-nine-tails crocheted from heavy white twine, and located also a handsome crop of twisted willow wood.

My introduction to S/M had begun with my answering a personal ad in the columns of the Saturday Review of Literature, a weekly publication out of New York City. In those days some of the wordings and contents of the ads were mildly outrageous for the times, growing wilder until the publishing of them was entirely stopped by the guardians of our American purity. The one that caught my attention [in August 1947] ran something like:

Should flogging be allowed? Ex-sailor welcomes opinions and replies. Box…i

Answering that ad put Steward in touch with Hal Baron, a former sailor dedicated to connecting every S (sadist) with an M (masochist) he could, who connected Steward with other men who had answered the ad.ii

Steward, then a college teacher, was interviewed by the controversial Dr. Alfred Kinsey, and became an unofficial collaborator on Kinsey’s sexual research. The two men share an interest in sexuality and record keeping; Steward kept a comprehensive list of his many sexual encounters in his “Stud File”, often noted as “sadie-maisie” or “sad-mashy”.iiiKinsey invented the term “S/M” (pronounced “ess-em”) as part of his group’s elaborate alphanumeric code for discussing sexual topics discretely. In 1952, Kinsey arranged a meeting between Steward and Mike Miksche, a freelance illustrator and erotic artist under the alias “Steve Masters”, as M (masochist) and S (sadist) respectively. Kinsey filmed this two-day encounter, the first homosexual encounter so recorded for the archives, as if documenting the mating habits of a rare species of lemur.iv (The film was financed by funds earmarked for “mammalian studies.”v)

Later in his life, Steward pursued many other men whom he hoped would be the “S” of his fantasies, often to great disappointment. Having to instruct the young hustlers sent by Chuck Renslow, Chicago-based publisher of beefcake magazines and owner of the Gold Coast leather bar, in how he was to be (mis)treated, Steward typed up a numbered “handout” which he had each new arrival read before the session. Titled “WHAT THIS PARTICULAR M LIKES”, it included instructions like “Please remember: his is your absolute slave” and “Piss in his mouth (a little, not too much…)” and “Give him a few whacks on the ass with your belt. Or use whip if one present.”vi Like Sacher-Masoch, Steward’s desires were so insistent he wanted nothing left to chance.

When leatherman culture began formalizing in the late 1950s, the aging Steward couldn’t adapt. His ambivalence about other homosexuals made him solitary and antisocial, and he believed that his desire, for rough, working-class or criminal-class, heterosexual men and sex that was always on the brink of real violence, could not be domesticated. He wrote an essay called “Pussies in Boots”:

An artificial hierarchy, a ritual, and a practice have been superimposed over a very real need of the human spirit [to locate that which is authentically masculine]… [but] the entire affair has become a ritual, a Fun and Games sort of thing, and in essence there is no difference today between a female impersonator or drag-queen and a leather-boy in full leather-drag. Both are dressing up to represent something they are not…

It is difficult to say at what point in such a “movement” the degeneration sets in, and the elements of parody and caricature make their first appearance. Perhaps the decay began when the first M decided that he, too, could wear leather as well as the big butch S he so much admired. And so he bought himself a leather jacket…vii

In Steward’s day, the closest thing to gay literature were hand-written or typewritten stories circulated in the homosexual underground. In America, no publisher or printer would touch the stuff. When Steward managed to get access to a hectograph, a device that could make maybe fifteen or twenty copies from a single master sheet, to reproduce his own stories, it was a huge leap forward.

Steward’s life also shows that what later generations of kinksters lionize as the “Old Guard” were once the new radicals.

END_OF_DOCUMENT_TOKEN_TO_BE_REPLACED

(I’ve been ragging pretty hard on the Fifty Shades trilogy and related phenomenon. At more than a few social events for kinky people, I’ve gone on rants about my opinion of it to anyone who will listen, and a few who won’t. One friend called me on this and made a spirited defence of the series. I asked her if she wanted to do a guest post on the subject, and she obliged.)

END_OF_DOCUMENT_TOKEN_TO_BE_REPLACED

As I’ve mentioned in earlier posts, it would be fascinating to witness the birth of a particular fetish, and I was fortunate enough to find one that has born recently.

Tales of the Veils, a site devoted to veiling fetish, announced its seventh anniversary last month.

END_OF_DOCUMENT_TOKEN_TO_BE_REPLACED 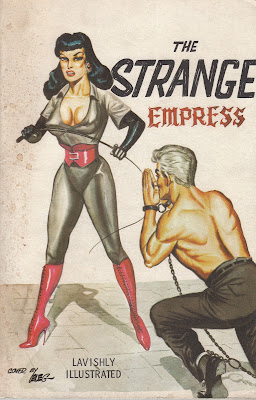