Cleopatra is a 1934 historical epic/romance, directed by Cecil B. DeMille. It came at the end of the pre-Hays Code era, when American films could be more sexually explicit. Just to be clear, it is also far from historically accurate.

The film sets up a contrast between austere and republican Rome and the decadent and autocratic Egypt, personified by Claudette Colbert as Queen Cleopatra in a series of extravagant, revealing dresses. We’ve seen this divide before between the West and the Orient. The film also borrows a lot from the Orientalist art tradition of the previous century, with Cleopatra lounging on silken beds, surrounded by slave girls in chains.

After the credits and a quick shot of the pyramids and palm trees, the first thing we see is a nearly nude woman (in silhouette) in chains, standing and backlit. Sex appeal is front and centre.

END_OF_DOCUMENT_TOKEN_TO_BE_REPLACED

There were two films titled Venus in Furs released in 1969. This is the one also known as Paroxismus, directed by Jesus (aka Jess) Franco, and starring James Darren, Barbara McNair and Maria Rohm. It has little to do with Leopold von Sacher-Masoch’s 1870 novel Venus im Pelz (aka Venus in Furs). (The other 1969 Venus was directed by Massimo Dallamano.)

END_OF_DOCUMENT_TOKEN_TO_BE_REPLACED

The Mask of Fu Manchu is a 1932 adventure thriller.

Many other people have written about the racial and gender politics of this film. Suffice it to say, they’re awful. This was at the peak of “yellow peril” racism in America, portraying a world on the brink of a cataclysmic war between West and East. Asians are portrayed as both vicious and weak, needing a leader like the Western-educated Fu Manchu to lead them.

This was also before the Hays code was put into effect in 1934, and it displays a degree of sex and violence that is still surprising today.

The two villains are both portrayed by white people in yellowface: Boris Karloff as Doctor Fu Manchu and Myrna Loy as his daughter Fa Lo See (“fallacy”?). Before Loy was the ideal American wife Nora Charles in the Thin Man movies, she played “exotic” or “ethnic” women in brown, yellow or black face.

END_OF_DOCUMENT_TOKEN_TO_BE_REPLACED 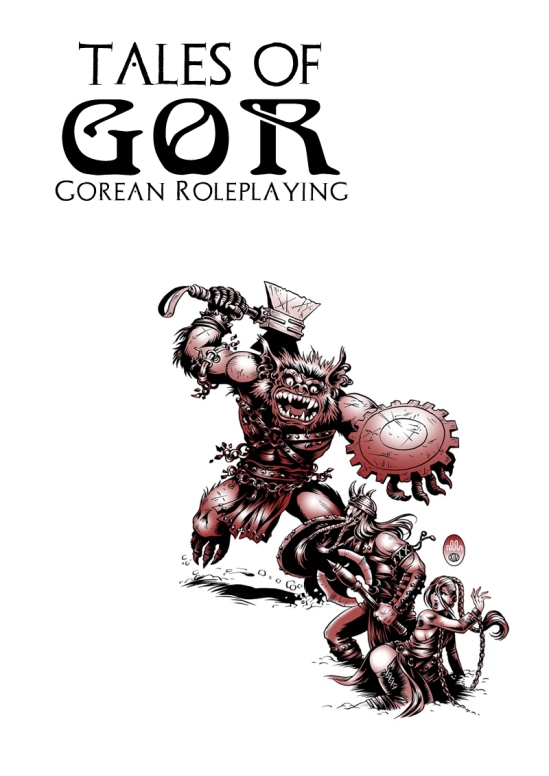 Cover mockup of Gorean RPG, showing a hairy humanoid creature about to attack an armed man, with a chained woman behind him

Postmortem Studios is working on a tabletop roleplaying game based on the Gor series of fantasy novels by John Norman (a.k.a. philosophy professor John Lange). Published since the 1960s, Gor is a modern version of the Orientalist fantasies of savage lands and slave markets and so on. You can read about their ongoing project on their blog. Gor has a long history of being recreated in Second Life and other online roleplaying environments, so it’s not surprising that someone would try to adapt it to the tabletop, dice-and-paper form of roleplaying.

Gor is notorious for its strong emphasis not only on the world’s apparently universal chattel slavery, but the male-dominant/female-submissive philosophy that justifies it, endlessly reiterated in the books.  That’s what made me pause when I thought about Manning illustrating the book. Manning’s work, starting with the graphic novel The Spider Garden, has a strong bi/queer flair, running all over the map of sexuality from conventional, heteronormative pinups to “sacred androgynes”, cross-dressed men, and other, stranger types of sexuality. This also comes in a time when video games and related media like tabletop RPGs are under a lot of flak for #GamerGate. The games designer, James Desborough, reportedly has connections to #GamerGate and some other controversies. It got me wondering: how will Gor be adapted into this medium?

END_OF_DOCUMENT_TOKEN_TO_BE_REPLACED

If I’ve been posting less, it’s that I want to devote more energy to finally getting at least a first draft of this book finished.

It’s a week later than I hoped, but I finished a draft of Chapter 4, on Orientalism, weighing in at a little over 7,000 words. It covers the centuries-long influence of Europeans being held prisoner in North Africa and the Ottoman Empire, and the lasting influence on pornography and sexual fantasy. I also touch on American captivity narratives, which are largely about white settlers abducted by Native Americans.

There are a few points I would like to cover, like Burton’s quasi-translation of the Kama Sutra and the vogue for exotic sexuality among certain Orientalist elites, but that may have to go in a later chapter. One of the things I’ve realized in this process is that I can’t include everything I’ve researched. I have to pick and choose, both for length and to keep the narrative pacing going. Just accumulating information and references will bore the reader.

Next is Chapter 5, “The Peculiar Institution.” This should be relatively easy, as I already wrote an earlier draft that covered Atlantic slavery but proved to be too long. I particularly went overboard describing the Munby-Cullwick relationship. Chop that down to 6-8,000 words and that should be good, at least for a first draft. The goal is to get it done by the end of June.

END_OF_DOCUMENT_TOKEN_TO_BE_REPLACED

iHarem is a blog with a vast collection of images and especially video clips of harem/slave girl/odalisque Orientalist fantasies, some going back to the early Silent Film era. Apparently, as long as there has been moving images, they have been used to deliver Orientalist fantasies of beautiful, available women, often in quantity.