I only know the broad outlines of the life of Touko Laaksonen, AKA Tom of Finland, so I can’t attest to the historical accuracy of this film. It is definitely a biopic, not a documentary. The film spans a considerable span of time, from Laaksonen’s furtive outdoor experiences during WWII to his celebrity in HIV-era America. 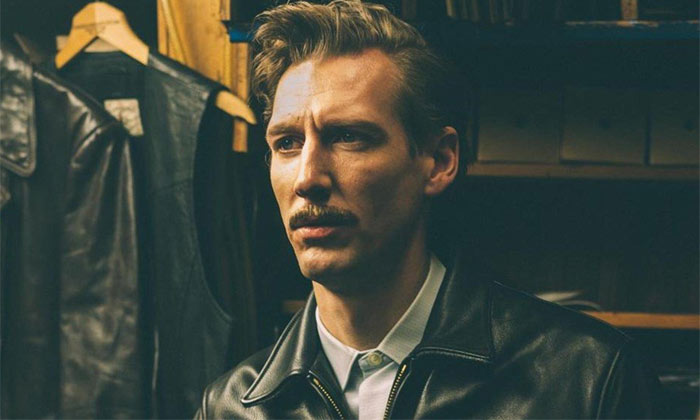 The history of Finland in WWII is complicated; the country fought both for and against Nazi Germany. For a time, there were German soldiers and officers on the streets of Helsinki, and it’s almost certain that some of them engaged in this kind of clandestine sexual encounter. Thankfully, the film avoids any sloppy juxtapositions of Laaksonen’s attraction to men in uniform with the legacy of fascism.

Laaksonen’s individual life reflected patterns in post-war life across Europe and America: men who had been dislocated from mainstream society, and not only sexually. These dark, transient encounters were fraught with risk. That man giving you the eye at the bar could, in an instant, run away, beat you up, rob you, or arrest you. In this twilight world, Laaksonen formed relationships in spite of the shame and paranoia, leading to underground parties.

It also fostered his art. The artist’s wartime memories, some positive, others fearful, as when he single-handedly took a Soviet soldier by surprise and killed him, merged with his attraction to post-war biker culture. As I’ve seen in other examples of kinky imagination, Laaksonen’s art was a reworking of real experiences. He imagined a kind of Utopia, an outdoor world of inhumanly handsome men boldly cruising each other, without secrets or shame. (The personification of Laaksonen’s fantasies appears in the film, which I think is unnecessary.)

In the film, Laaksonen clearly enjoys leather on himself and on other men. While he wears such outfits at the house parties thrown by his “homophile” friends, and some attendees are shown doing spanking or light whipping, he doesn’t partake in any sadomasochistic play.

While Laaksonen was quietly living a closeted life with his partner in Finland, his artwork had become an underground sensation in Europe and elsewhere. Some of it had been pirated. It was enough for him to be invited to the USA in the 1970s.

After living in the closet in Finland, traveling to the pre-HIV gay district is a major culture shock for Laaksonen. The world he had only imagined had been made real in America. Admittedly, the film paints a slightly too rosy picture of 1970s gay life, but it makes the point that Finland hadn’t even imagined the idea of gay liberation. Laaksonen truly was a voice in the wilderness, creating a fantasy that inspired men around the world.

The last third of the film concerns, unavoidably, the impact of HIV, both personally and politically. Laaksonen and his American friend and host Doug (an approximation of Chuck Renslow) both lose their partners, but they are also inspired to take back control of Laaksonen’s art and to use it for HIV education and publicity.

The film ends on an optimistic, Utopian note, proclaiming, “Anyone can be a Tom of Finland man.” The final scene is Laaksonen as the guest of honor at a Mr. Leather competition, and the people on the stage behind him and in the audience in front of him, while all dressed in black, have a variety of body types and gender expressions.

Finnish actor Pekka Strang gives a necessarily internalized performance as Laaksonen, always conveying what’s going on inside the man, even if he can’t say it. We see the complexity of his relationship with his sister, and his sadness when he finally confirms what she has long suspected, and still refuses to accept. Director Dome Karukoski contrasts indoor settings of intimacy and the outdoor settings of freedom, using the beauty of the Finnish countryside.