This is a touchy subject, and one that many people have remained silent about.

While the antebellum legacy of sexual violence on black female subjectivity and on representations of the black female body is substantive, how black women deliberately use the shadows of slavery and engage antebellum sexual politics– aesthetically, rhetorically, and symbolically– in the delivery and/or receiving of sexual pleasure has not been adequately considered. I am interested in how the evidence of slime– a staining sludge of pain and violence– becomes a lubricant to stimulate sexual fantasies, heighten sexual desire, and provide access to sexual rapture. [Pg.32]

How do we acknowledge what matters— the historical, social, and political contexts that script slave/master and Indian/cowboy scenarios while accessing pleasure in their staging? [Pg.37, emphasis in original]

In her essay in Against Sadomasochism, Alice Walker condemned the image of a consensual black female slave in the 1980 documentary S/M: One Foot Out of the Closet, and wrote that “Regardless of the ‘slave’ on television, black women do not want to be slaves. They never wanted to be slaves.” Yet in the same essay, she uses the image as a teaching tool, instructing her students to “imagine herself a ‘slave’, a mistress or a master, and to come to terms, in imagination and feeling, with what it meant.”[Pg.38-39]

So how exactly does raceplay “work”?

Cruz references the writings of Viola Johnson and Mollena Williams on the subject, and also references Margot Weiss’ Techniques of Pleasure, and her theory that the idea of “the scene” allows (white) practioners to disavow the influence of real world inequality and hierarchy. Cruz, however, says that “race play does not exhibit a disavowal of racial hierarchies or material institutionalizations of racial domination; it recognizes them.” [Pg.55]

What would happen if we understood the fantasy/reality divide as enabling not a disavowal of racial hierarchies and the power of racism but rather a rapture in them? I advocate reading race play as a way to funk and fuck with racism: a potential parody or mimetic reiteration that exposes the fabrication of race and challenges and reifies racial-sexual alterity and racism and a sexual relationship with these “racalisms”– a pleasure in their enactment, a getting off on, a fucking. Read this way, race play may be less of a neoliberal “fantasy of an escape from racism” and more of an escape in it or to it.[Pg.56, emphasis in original]

I mean if we are going to try to make parallels between the world outside of fetish and inside of fetish and claiming that people who engage in racial type play are racist, then we are going to have to bring in domestic violence, assault and battery, verbal abuse, gay bashing, civil liberties. So we let some of this stuff go because no [sic] will bat an eye to a guy being caned, or nipple clamps, or labia clamps being put on someone, yet you know the use of certain words in racial context gets people up in arms. So you know, you have to be consistent, if race play is off limits then so is impact play, breath play, forced bi or any other sorts of things that aren’t kosher outside of fetish.[Pg.56-57]

However, Cruz cautions against lumping in race with other social hierarchies and obscuring their historical specificity. 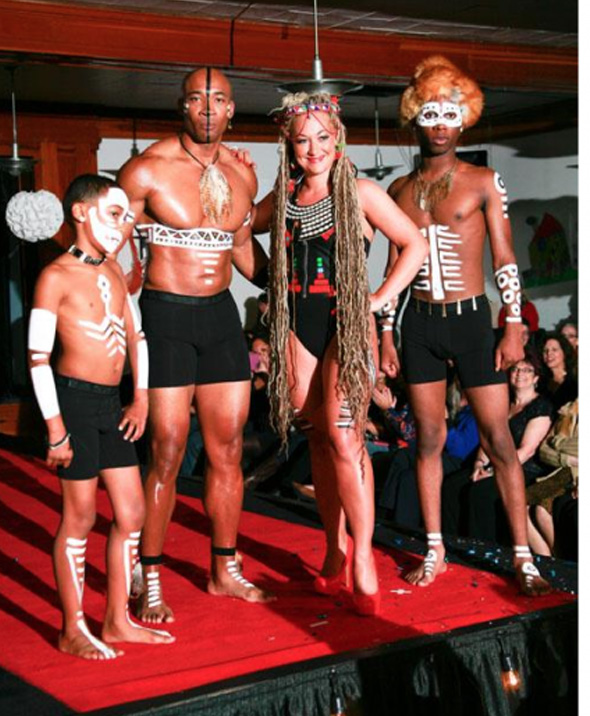 Rachel Dolezal in a fashion show. 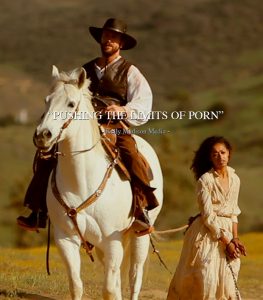 Cruz goes into the vexed histories of sadomasochism and race in visual media, and specifically pornography. Her key text is the fourth segment of Get My Belt (2013, produced by Kelly Madison), a high-production value hardcore anthology, which casts Skin Diamond as a black female slave in an unspecified, antebellum/Western scenario. (Diamond, incidentally, appeared in the softcore Submission TV series, in which she apparently functioned as a kind of tool for the white male lead to seduce white women into submission.) The last segment of Get My Belt, Cruz says, is merely the latest manifestation of chattel slavery’s hold on the erotic imagination, as seen in the 1970s sub-genre of plantation exploitation films (e.g. Mandingo, Passion Plantation) and in the 2010s films like Django Unchained and 12 Years a Slave. [Pg.94]

I think I like to see the black woman on the bottom because I just think it intensifies the injustice and the cruelty of the, you know, the whole domination experience, you know. I just think there’s something to do with, like I said, the cruelness of it all that, you know with slavery and the history of racism in this country and the injustices that have gone on. I think that it just kind of intensifies the humiliation factor in the whole paradigm.[Pg.105]

He puts warning messages at the beginning of his videos, saying “This video was made for those who have a fantasy race play fetish; the actors are only role playing and the action is simulated”. [Pg.106] Raceplay remains something that has to be put in the special toy box, and often not even named as such.

Cruz describes an incident in 2004: TES issued a warning for its annual TES Fest Edge Play track. People complained about a workshop on race play, titled “Nigger Play; Free at Last!” led by a black male BDSM educator Mike Bond, the majority objecting to the word “nigger” in the title. In response, the organizer put up a warning for the edge play track as a whole, though without using the terms “nigger” or “race”. [Pg.107-108] Bond pointed out that his workshop is specifically about black submissions, which is not the same as black dominant/white submissive scenes. “submissive white men have always had the freedom to engage in their form of ‘affirmative action’ race play at the hands of ‘powerful black women.’ It’s considered cute and PC.” [Pg.108] (See this collection of letters on the incident.)

Cruz says that raceplay, a transgression within a subculture built on transgression, should be viewed as queer. “That is, the pleasure of race play is a queer pleasure, although often denied as such.” [Pg.116]

The term “miscegenation” itself was introduced in an 1864 pamphlet titled Miscegenation “was revealed to be a political hoax aimed at sabotaging Lincoln’s campaign for reelection, [which] played with important extant desires and phobias surrounding black sexuality, stereotypes of racialized sexuality, and sex across the color line that interracial pornography continues to engage.” It advocates for “negro” sexuality as an antidote for the decay of white American sexuality. [Pg.160]

This extends through the complex history of black women’s body in medicine (e.g. the mistreatment of the woman known as  Saartjie Baartman, the invention of speculums by J. Marion Sims for probing the bodies of enslaved black women [Pg.201-202]) into the present day. On Kink.com, black women performers are tagged as “Ebony”, which “signals pornography’s continuing understanding of black female sexuality through skin color and the identificatory failure that black women experience and engender at the site of sexuality.” [Pg. 173] See also the complex racial fantasies, and emphasis on skin and skin colour, in the Munby-Cullwick relationship and in Memoirs of Dolly Morton.

As we’ve seen in before in researching this subject, Atlantic slavery has cast a long, long shadow in Western culture. Sexual fantasies are one of the myriad ways this cultural trauma has influenced the world.

Cruz is tentative about using the “cultural trauma” idea as a way of thinking about raceplay, and doesn’t want to define raceplay as a symptom of a pathology. She wants to “depathologize black women’s non-‘normative’ fantasies” and “foreground […] black female sexuality’s pleasures in the unpleasurable”.[Pg. 219] Raceplay, and its endless repetition so characteristic of sexual fantasies, might actually be a way of processing this trauma.

Raceplay, which the Tumblr post at the beginning of this post wanted to expel from sex-positivity, is transgression within transgression, queerness within queerness. As Alison M. Moore observed in Sexual Myths of Modernity, writing about the sexual fantasies engendered by another cultural trauma, “Fantasy (you don’t say!) is neither historically accurate nor rational.” It’s messy and disobedient, yet also a site of new possibilities.