Though it borrows element from classic Westerns and 1970s blaxploitation, the basic structure of the film is a captivity narrative. However, “nature” and “civilization” are inverted from the way they are configured in a film like, say, John Ford’s The Searchers. In this film, nature is seen as a place of peace and freedom, while civilization is seen as a place of cruelty and savagery. In Django’s quest, the “heart of darkness” where Broomhilda is imprisoned  is a Southern plantation, and the most violent and sexually depraved actions occur indoors.

Broomhilda (played by Kerry Washington), has no character arc and scarcely any dialog. Her function in this story is to suffer in captivity, and to suffer beautifully, so that Django can employ righteous violence in retribution. She first appears to Django  in brief flashbacks and visions, first in romantic pastoral shots of her in nature, then of her being bound and beaten. When we first see her in person, she is being punished in the “hot box”, naked, of course. The plantation workers douse her in cold water (slow motion shot) and take her away. Later, Broomhilda’s scarred back is revealed at the dinner table, right in front of Django, Schulz and the plantation owner’s sister (something that would happen very rarely, if ever, in reality). This shot of Broomhilda’s whip-scarred back creates a link between her, Django and the other male slaves who bare their scarred backs before killing their former owner.

This also links to the famous photograph of the massively scarred back of a slave, known only as “Gordon”, which became an iconic image in abolitionist media.

Scarred back of Gordon, a slave. Louisiana c.1863

This is very much a body-oriented film. The “r” letters branded into Django and Broomhilda’s faces, marking them as runaways, link them together without words. I’d say that the film is quite fascinated with the technology of slavery, the particular body methods of applying pain and deprivation and removing dignity. How does one castrate a man without making him bleed to death in the process? How mand This makes Django Unchained akin to Goodbye Uncle Tom, in that both deny blacks the opportunity to speak, except in anger and retribution. Otherwise, blacks are mute, homogeneous, suffering flesh. We don’t need to know who these men and women are as individuals, just that their bodies have been confined and injured.

Much like Uncle Tom’s Cabin, this shows that despite the South’s claims to gentility, despite the veneer of civility and even affection, it is a society and a culture built on and sustained by violence. the film breaks through the image of the South as an orderly, courtly society. Plantation owner Calvin Candie (played by Leonardo Di Caprio) affects sophistication, passing himself off as “Monsieur Candie” the Francophile (who can’t speak a word of French), who bickers and jokes with his head slave Steven like Jack Benny and Rochester, but he’s a sadist and a peddler of flesh. Candie’s minions are bestial thugs. The “bagheads” (proto-Ku Klux Klan) are vicious buffoons who can’t even see through their masks. Southern slavery doesn’t just foster cruelty and perverse sexuality, it is built on them, and the people who operate this system are morally bankrupt.

However, Django is not really about slavery as a historical issue. The narrative plays fast and loose with history; for example, though it loosely references Wagner’s Siegfried, it is set before the debut of that work. At the gentleman’s club, one of the maids wear what amounts to a modern French maid’s costume, ignoring that not even a slave woman in a brothel would go around with her legs exposed like that. And the “Mandingo fights” to the death Candie manages would not exist; slaves were just too valuable economically to kill casually. It also doesn’t get into the nuances of slavery, the complex economic, emotional and social relationship of Master and slave.

Like Tarantino’s earlier Inglourious Basterds, this isn’t a counter-historical movie, but a counter-fictional movie. It’s a movie about movies, mashing up two distinctly 1970s genres of film: the spaghetti Western revenge drama, and the historical blaxploitation. It’s entertaining, but rather misleading.

In the early years of the 16th century, to combat the rising tide of religious unorthodoxy, the Pope gave Cardinal Ximinez of Spain leave to move without let or hindrance throughout the land, in a reign of violence, terror and torture that makes a smashing film. This was the Spanish Inquisition…

Sure, you can do a book or film about the Spanish Inquistion that gets into all the complicated religious and political issues. Or you can head straight for the medieval torture chamber and dig into the most reliable of spectacles, the human body in duress. American slavery provides abundant opportunities for bodies in duress.

In the Overthinking It podcast on Django Unchained, one of the panelists brought up the old argument it is impossible to make a truly anti-war film, because film is a medium for spectacle, and war provides spectacle like little else. Likewise, Django features many beautiful shots of Broomhilda being bound, beaten, hotboxed and doused with water naked, including sepia-toned and slow-motion. Other ostensibly anti-slavery media have fallen into the trap of making the suffering female slave body too beautiful a spectacle. 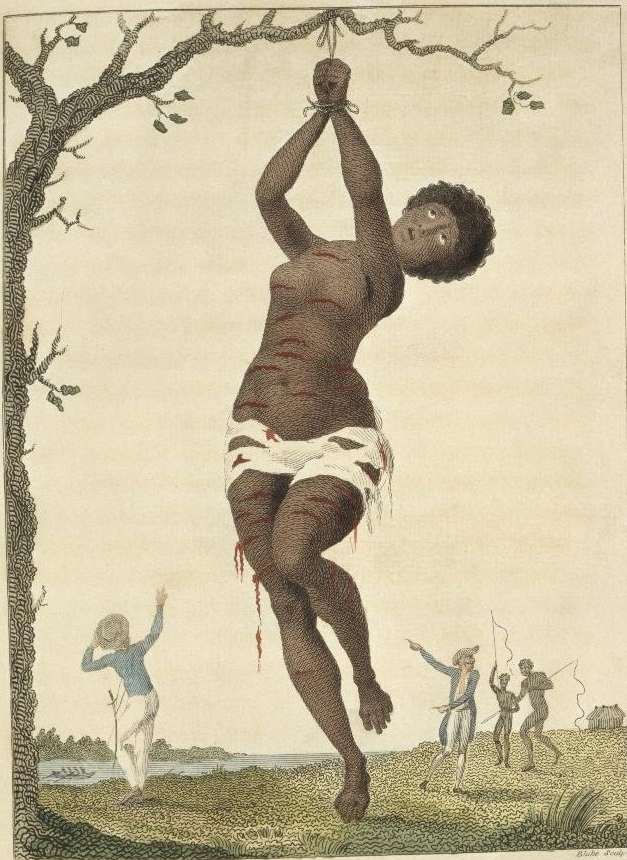 And this illustration from an edition of Uncle Tom’s Cabin: 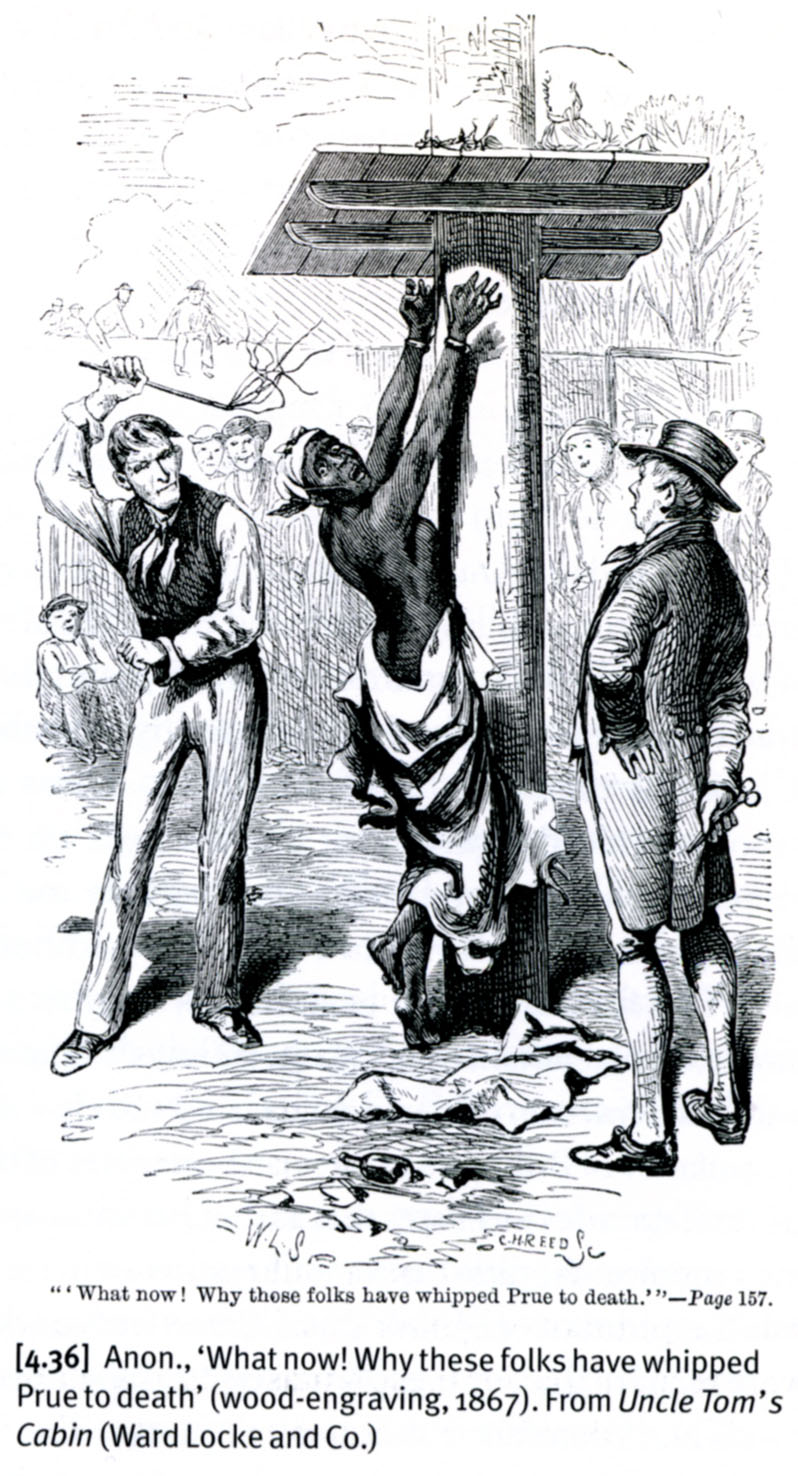 In other words, Django Unchained is just another in the long linage of stories that have used slavery as a backdrop for other dramas. The beautifully suffering female body has so many uses.

Addedum: In Tarantino’s script for Django Unchained, there’s an extended sequence about what happened to Broomhilda after she and Django are separated. I don’t know if any of this was shot; perhaps it will appear on the DVD.

She’s sold as a live-in girlfriend to Scotty Harmony, a “slow” and “shy” White boy, and ordered to make a man out of him by his mother. She becomes his concubine, and they appear together in the demi-monde of White men and their slave mistresses (known as “ponies”). Scotty takes Broomhilda to the Cleopatra Club, where the club’s owner, Calvin Candie, goads him into putting up Broomhilda in a card game. Scotty loses the game and Broomhilda, and after accusing Candie of cheating, gets shot dead in a duel. That leads to a somewhat over-the-top scene in which Candie chases a naked Broomhilda around a hotel with a belt.

From a writing standpoint, this doesn’t work as well as the filmed version, which shows Candie as the type who doesn’t get his hands dirty, and also as a Master who has no particular relationship with Broomhilda.

Tellingly, though perhaps not surprisingly, Broomhilda still has very little dialog in this sequence. Her thoughts are conveyed by a “literary narrator” in voiceover, instead of her own voice. And the sequence ends with her naked in the mud being beaten. Again, black people’s voices are silenced while their bodies are exposed.