Cover of first issue of On Our Backs

Within  the  anti-SM  positions  of  critics  like  [Diana H.] Russell  and  [Lorena Leigh] Saxe,  there  is  no epistemological  room  for  a  pro-feminist,  extremely  political,  non-bourgeois  sadomasochist who is also a feminist activist involved in actions to fight women’s oppression in society. SM is  positioned  as  the opposite  of women’s  liberation. Such  extreme  statements  indicate  that these debates were not really about  the morality of  the personal practice of SM, but  instead about  the  power  of  definition,  visibility  and  inclusion  in  the  lesbian  feminist  movement. [Robinson 2015, Pg. 115] Cover of On Our Backs magazine, Summer 1985

In anthologies like Coming to Power and magazines like Bad Attitude and On Our Backs (both launched 1984), pro-BDSM lesbians created their own discourse which positioned themselves as rebels against both mainstream society and the orthodoxy of radical lesbian-feminists. In effect, both sides took pleasure in their chosen roles in the drama. [Robinson Pg.136-139] For example, the first issue of On Our Backs included a satirical article about “Andrix Workin” (i.e. radical feminist Andrea Dworkin) of “Concerned Women Against Perverted  Individuals  (C.W.A.P.I)”, titled “A Cup  of  Tea is Preferable to Any Sexual Encounter”. [Robinson 2015, Pg. 140] Likewise, Against Sadomasochism and Unleashing Feminism had their own anti-SM satires, often depicting their opponents as immature. See Walker-Crawford’s “The Saga of Sadie O. Massey” in Against Sadomasochism. (Both sides wrote dystopian science fiction stories prophesying the worst if the other side won.)

Bad Attitude and On Our Backs could be hyperbolic and reactionary [Robinson 2015, Pg. 132], but they were crucial in forming the identity category of the SM lesbian, and it couldn’t be separated from the lesbian-feminist criticism. The letter columns showed a wide variety of attitudes towards sexual expression and SM, but the discussion was what mattered. [Robinson Pg.134, 142] These magazines were small-scale publications in reach and reader numbers, and operated on a shoestring budget at a loss, but they were there, broadening the discourse. Some people read them as shared photocopies, samizdat-style. [Robinson 2015, Pg. 130, note 168] 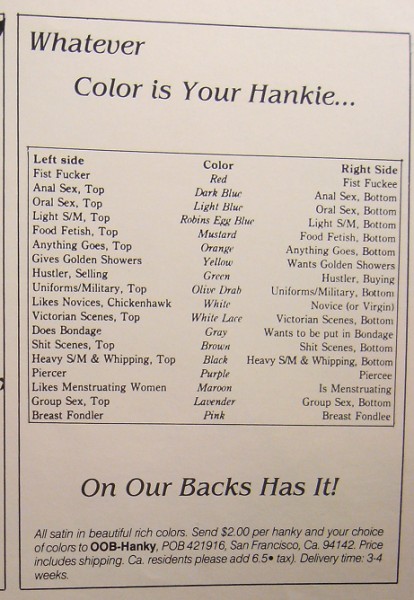 Moral panics don’t end. They just fade out. SM people had a major presence in the 1987 March on Washington, but were not mentioned by on our backs or the mainstream media. Robinson suggests that the kinksters won, if only by default because the anti-SM critics were exhausted on this front. [Robinson 2015 Pg.144-145]

Robinson characterizes this conflict, in which “various  sophisticated  discursive  techniques  and  violent  or  violating  actions  (from  humour  to  picketing)  have  been  used  by  feminists against each other in the pursuit of a sexuality that aligns with a politically correct  feminist politics” as “an iteration of a longer conflict between feminism and lesbianism….” [Pg.148] Borrowing from Foucault, who wrote that, “the  sodomite  was  a  temporary  aberration;  the  homosexual is now a species”, Robinson writes:

We see the creation of the lesbian sadomasochist  as  a  “species”,  not  based  on  biological  reality  but  constructed  through  discursive  practice,  with its origins both in sexological conceptions of sexual deviance as well as lesbian feminist  ones, and all the pleasure, control and power plays that such a move entails. [Robinson 2015, Pg. 149]

Robinson wraps up her thesis by pointing out the large areas of the history of lesbian sadomasochism that are still unexplored, and urges others to pick up where she left off. The lesbian sex wars monopolized the discourse on lesbian sadomasochism and lesbian sexuality in general in this period, and this obscures so many other topics. That diminishes our ability to understand the complex issue of sexuality.

What  the  debates  over SM  show us  is  that perfect alignment between  sexual behaviour and  sexual politics  is  neither possible nor desirable, or that the personal is not, in fact, wholly political. “Consent”  seems to name the public/political (and politicizable) dimension of private/personal sexuality.  Perhaps  it  is  the  debate  over  what  constitutes  meaningful  consent  that  we  should  bring  forward  into  our  own moment  from  the SM  debates  –  not  the wrangling  over  the  political  implications of particular sex acts. [Robinson 2015, Pg. 144]

Another short summary of the Lesbian Sex Wars.

The Lesbian Herstory Archives at the DCMNY site has a number of archive photos related to this issue.

One Response to “Understanding the history of lesbian sadomasochism Part 3”