Despite the headline and the front cover copy, this 1975 Village Voice article is actually pretty even handed snapshot of the east coast kink world in the mid-70s.

Goldstein’s account of what gay leathersex was like in 1970s,  five years before this article was written:

On a good night you might meet a leather man in Keller’s, a man in black who knew about motorcycles and James Dean’s love life, who stood over you with a waxed physique, like some Satanic academy award. And you would stand there, nipple to eye, until he brushed against you, the slightest shove, and then again, to show you muscle, and then again, crowding you toward the corner of the room where, without a word, you would look down at the keys which dangled from his left pocket and know that if you brought him home, you might do things together you could never do with a fluff.

Today, of course, everyone is wearing leather or work clothes or Western, and everyone’s hair is kept in a Keller’s trim, and keys have become the accessory, replacing turquoise as a sparkler in the night. The old-time leather people are reduced to private parties because they can’t stand this invasion of fluff. […] many veteran sadomasochists call “brown leather bars” because they attract people who are into wearing accessories but not necessarily experienced in SM sex.

It’s interesting that, even in 1975, kinky people were concerned about being assimilated, about there being too many tourists or clueless newbies in the scene, about vanillas copycatting our look. This may be the constant state of the BDSM subculture (and perhaps all subcultures): a perpetual crisis of authenticity. Though the kink scene is in a perpetual state of being “discovered” by the mainstream, there was a lot going on in the mid-70s. TES and PEP were only a few years old, Susan Sontag was writing about fascinating fascism and movies like The Night Porter and Ilsa, She Wolf of the SS were in the theatres (or soon would be).

The important thing to remember about this scene is that it is always voluntary, its parameters agreed upon in advance, so that a slave may program his arousal, and refuse to participate in anything he feels threatened by.

So how far back does the doctrine of consensuality go? Who first formally articulated it?

Goldstein describes a scene in which SM is a hypermasculine refusal of “home cooking” intimacy, gay humanism and political liberation, and anything feminine, though somebody still has to be the bottom. You can “graduate” from bottom to top, but the transition is one-way and permanent. And yet, there’s the perpetual possibility of falling from the impersonal meeting of archetypes into a companionate relationship.

There are only a few references in women or heterosexuals in the article; an operator of the Pleasure Chest chain of adult boutique says he sells 75 per cent of his inventory to straights.

I think there are certain people who are strongly (and perhaps excessively) fascinated by the symbolism of fascism and authoritarianism, men like Jean Genet and Boyd Rice and Goldstein’s Rex, and of course, “every woman loves a fascist.” Are they harmless eccentrics who, by their worship of the appearance of power without actual power, reduce the entire aesthetic to a kind of camp? Or maybe they know in their hearts that in any real reactionary revolt, they’d be among the first up against the wall? 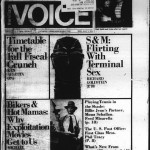 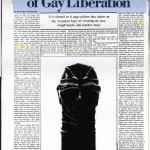 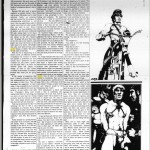 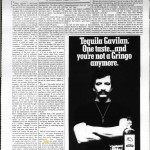 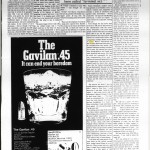