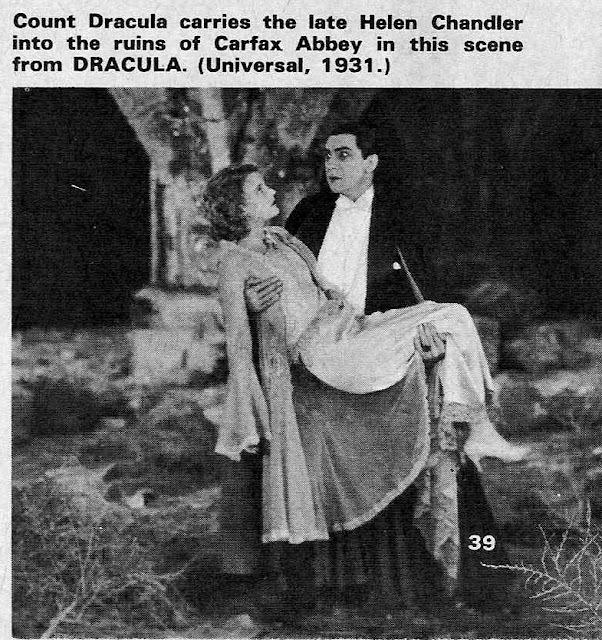 The first rule of monsterish carry-offism is that the creature must carry off the maiden in destress [sic].  Or dat dress. And carry her off well.

No one really cares where they carry her to, it’s how that makes ’em howl. ‘Cuz, after all, whether it’s to Dracula’s dungeon or a dinosaur’s pad, chances are 1,000,000 to none that the hero will rescue her in the nick of time — heroes’ [sic] have a knack for that sort of thing — and drive a stake thru [sic] the vampire’s heart (this is known as a wooden performance) or blow up the brontosaurus with grenades, explosive bullets, mortar shells & chemical bombs.

What we have here is the juxtaposition of the helpless (always white/normal) woman and the monster (physically and/or sexually and/or racially deviant). For America, riven with racial anxieties, this represented a worst case scenario, the possibility of interracial rape and miscegenation. As usual, the sexually vulnerable woman serves as a symbol for what is vulnerable in society. In the previous century, this anxiety manifested in the captivity narrative. 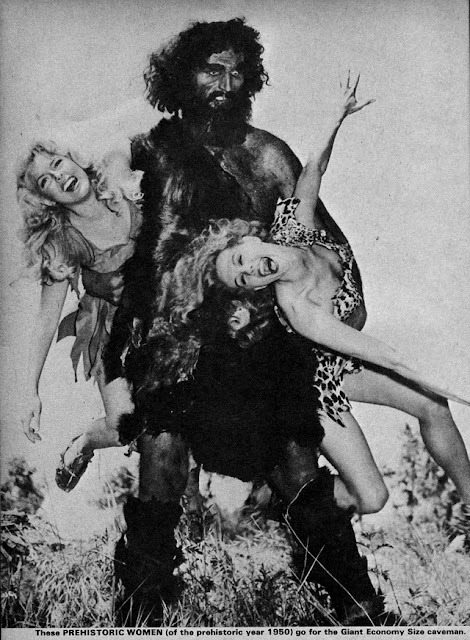 Whether the woman swoons into passivity or kicks and screams, she’s in need of rescue from the monster before it does… something, it’s not entirely clear what, to her. Thus the presumably male (and “normal”) male viewer knows what to do, how to fill in the triangle. The scenario is “normal man saves normal woman from monster.”

I’d love to be carried off by Dracula or The Phantom Of The Opera. And the hero can just forget about rescuing me. If he tries I’m kicking him in the crotch and letting the monster have him!

It should be noted that some of carriers are more ambivalent figures, perhaps searching for lost love, in keeping with the Gothic tradition of the dark, conflicted male figure.

Even more contemporary monsters/anti-heroes get in on the act.

Instead of racial difference, Hannibal Lecter represents a general sense of foreignness (he’s generically European), as well as being an upper-class intellectual. One could make a case that he reflects not racial anxiety but queer anxiety, the fear of sexuality that has no interest in heterosexual reproduction and is fascinated with new uses for human bodies.

Taking it a step further, we have Batman, the hero who is styled like a Gothic villain/monster.