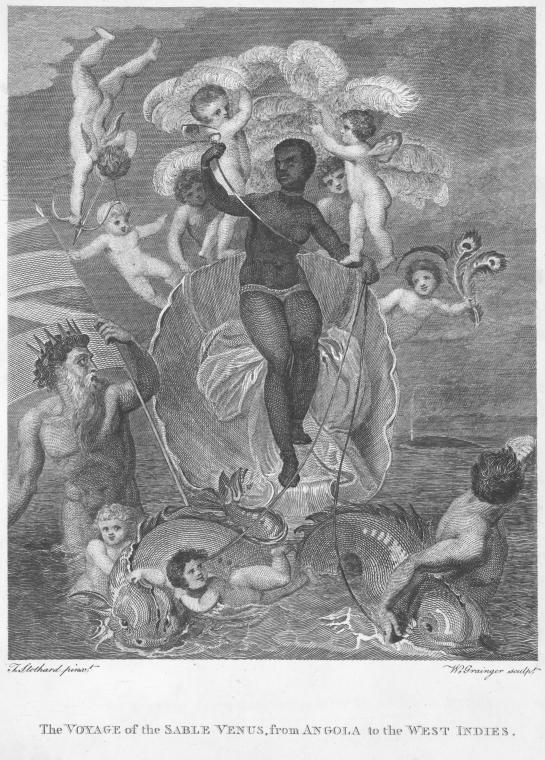 Witness “The Voyage of the Sable Venus from Angola to the West Indies”, by Thomas Stothard, Esquire, of the Royal Academy. It was published in the second book of the third edition of The History, Civil and Commercial, of the British Colonies in the West Indies, by Bryan Edwards, in 1801. It references Botticelli’s “Venus on the Half Shell”.

If any image is obscene, this is it. It is iconography as pornography. “No more preposterous misinterpretation was ever perpetrated of the ‘Middle Passage,'” Hugh Honour says, than the Sable Venus. Honour remarks that neither the poem nor the image “so much as alludes to slavery: the theme of both is the physical charm of the black woman” (33).

Whereas other depictions of African women depicted them as bestial and freakish, living throwbacks (such as the so-called “Hottentot Venus”, displayed as a freak), “The Sable Venus” depicted an African woman as sexually appealing and, more importantly, available, even consenting, dressed only in pearled collar and bracelets and a narrow girdle.

This blatantly proslavery image is perverse because it creates an image of luxury and beauty out of imperial power and racism, concealing the actuality of the dirty business.

Over four centuries, an estimated eleven million Africans were shipped to the Americas, with up to a quarter of them dying en route. The Middle Passage itself was a psychologically damaging experience, a kind of dark ritual of initiation, with the end goal of creating an atomised worker, with no ties to family or tribe. (More on this when I finish Orlando Patterson’s Slavery and Social Death.)

A poem by Isaac Teale in the same volume as “The Sable Venus” said that black and white women are equally appealing in the dark:

The loveliest limbs her form compose,
Such as her sister VENUS chose,
In FLORENCE, where she’s seen;
Both just alike, except the white,
No difference, no – none at night,
The beauteous dames between.

(This echoes a saying from Ben Franklin about sex with older women, claiming that “in the dark, all cats are grey.” A similar saying is also found in a 16th century book of proverbs.)

This is an interesting development in the visibility of slavery. Most of the imagery I’ve studied so far comes from abolitionist sources, with the intent of horrifying the viewer with the violence and/or inducing empathy for the suffering. It’s possible that the just wasn’t a lot of pro-slavery imagery. The idea was that slavery itself was invisible to those who supported it, a necessary part of modern industry and commerce, and no more to be dwelled on than images of animals used in cosmetics tests. So the first exposure many people may have had to black people may have been abolitionist images of slaves.

This blatantly proslavery image is perverse because it creates an image of luxury and beauty out of imperial power and racism, concealing the actuality of the dirty business. Much like the “Virginian Luxuries” image, created a few years later circa 1815, it reveals too honestly the fantasies of the white men who created and consumed this image. 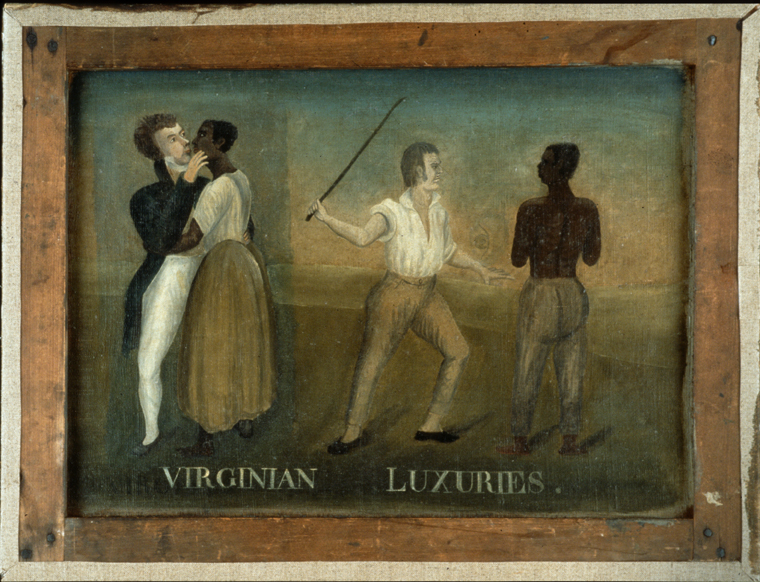 We’ll return to the relationship between images and politics later.