And one finds a similar obscene subtext even where one would not expect it – in some texts which are commonly perceived as feminist. In order to confront this obscene “plague of fantasies” which persists at the level of “subliminal reality” at its most radical, suffice it to (re)read Margaret Atwood’s The Handmaid’s Tale, the distopia about the “Republic of Gilead,” a new state on the East Coast of the US which emerged when the Moral Majority took over. The ambiguity of the novel is radical: its “official” aim is, of course, to present as actually realized the darkest conservative tendencies in order to warn us about the threats of Christian fundamentalism – the evoked vision is expected to give rise to horror in us. However, what strikes the eye is the utter fascination with this imagined universe and its invented rules. Fertile woman are allocated to those privileged members of the new nomenklatura whose wives cannot bear children – forbidden to read, deprived of their names (they are called after the man to whom they belong: the heroine is Offred – “of Fred”), they serve as receptacles of insemination. The more we read the novel, the more it becomes clear that the fantasy we are reading is not that of the Moral Majority, but that of feminist liberalism itself: an exact mirror-image of the fantasies about the sexual degeneration in our megalopolises which haunts members of the Moral Majority. So, what the novel displays is desire – not of the Moral Majority, but the hidden desire of feminist liberalism itself.

I can’t imagine that George Orwell, had he lived to see this edition of his best known novel, would have been terribly pleased by this pulpy, sexed-up cover for 1984. Quite the bedroom eyes for a member of the anti-sex league. It reminds me of a gag in The Seven Year Itch, in which the protagonist makes a living putting tarted-up covers on innocuous titles like Little Women so they will sell on dime store racks.

The back cover continues in this vein: 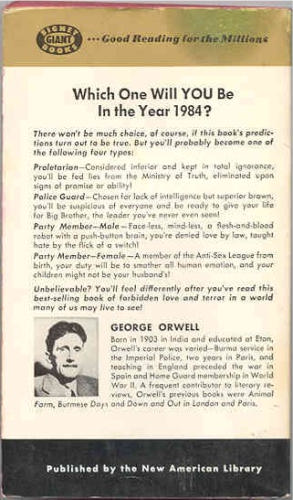 This makes an interesting echo to the ancillary images with sexy flagellation and the like to Harriet Beecher-Stowe’s Uncle Tom’s Cabin and other abolitionist media, which could be seen as a kind of dystopian literature (warning about what is rather than what could be). As Nalo Hopkinson observed: “Dystopias happen.” And if you’re kinky, dystopia offers far more fantasy inspiration than utopia. As a previous commenter on this blog mentioned, Margaret Atwood’s The Handmaid’s Tale was a major turn-on for her, even though it was totally against her politics.

I have to confess that I haven’t read 1984 or Brave New World, though I know that sex figures prominently in the two books. More to the point, sex is compulsorily regulated by authority in those dystopias.

One thing I’d always hoped to witness, since I started to study sexuality seriously, was the birth of a new fetish. To me, that would like seeing a new species evolve right before your eyes.

I have yet to be the first to discover a fetish, but I’m always on the lookout for new ones. The closest I’ve come is coming across the web site, Tales of the Veils. This site is devoted to stories and images of veiled women. This is not about the cute little diaphanous veils worn by women in harem fantasies. This is about heavy, full-body covering garments worn by Muslim women living in strict purdah. I believe, though this is the kind of thing which can’t be proven, that veil fetishism has grown in the past few years. The site quotes from a Wikipedia article which seems to have disappeared: