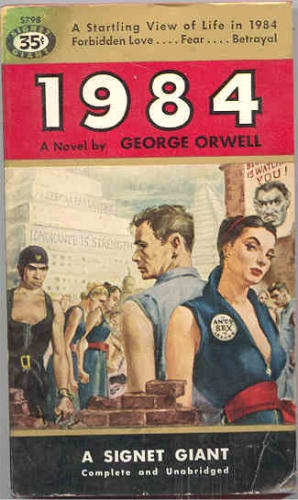 I can’t imagine that George Orwell, had he lived to see this edition of his best known novel, would have been terribly pleased by this pulpy, sexed-up cover for 1984. Quite the bedroom eyes for a member of the anti-sex league. It reminds me of a gag in The Seven Year Itch, in which the protagonist makes a living putting tarted-up covers on innocuous titles like Little Women so they will sell on dime store racks.

The back cover continues in this vein:

This makes an interesting echo to the ancillary images with sexy flagellation and the like to Harriet Beecher-Stowe’s Uncle Tom’s Cabin and other abolitionist media, which could be seen as a kind of dystopian literature (warning about what is rather than what could be). As Nalo Hopkinson observed: “Dystopias happen.” And if you’re kinky, dystopia offers far more fantasy inspiration than utopia. As a previous commenter on this blog mentioned, Margaret Atwood’s The Handmaid’s Tale was a major turn-on for her, even though it was totally against her politics.

I have to confess that I haven’t read 1984 or Brave New World, though I know that sex figures prominently in the two books. More to the point, sex is compulsorily regulated by authority in those dystopias.