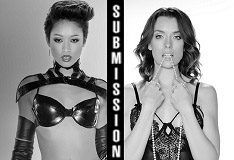 In another subplot, Ashley’s housemate Jules is having a lesbian affair with Scarlet, the wife of another man. The scene is shot like an old Penthouse girl-girl “love set”, soft focus in a domestic setting. Scarlet is a photographer and persuades Ashley to model nude for her.

When Ashley is cornered by Rafe, her drunk one-night-stand, Elliot intervenes in classic white-knight fashion. He introduces himself to her, and he’s not too much of a creeper. He strikes up a conversation over Ashley’s copy of Slave. When Ashley implies that the author must really be a woman, Elliot reveal himself as the author. Dylan steps in and breaks it up.

Remember when I said Elliot/Nolan wasn’t too much of a creeper? On his way out, he steals Ashley’s bra and panties out of her laundry, and puts them on another woman and fucks her. He projects a fantasy of Ashley being virginal and innocent (which she isn’t).

More Fifty Shades intertextuality, as Elliot sends Ashley an advance copy of his next book. There’s an interesting question here of whether Ashley is into Elliot himself, or just into the aspects of herself his book triggered. Elliot starts sending phone and mail commands to Ashley. He wants to hear her read his book to him. (I know that writers tend to crave external validation, but really?)

The stereotype dominant trope is broken a little more, as we see that Elliot is not a “master of the universe”. Dylan is chafing under Elliot’s divided attentions, forcing her to top him from the bottom. She’s not just his obedient fuckpuppet. It’s actually a relatively realistic portrayal of a dom-sub relationship on the rocks.

Jules demands that Scarlet leave her dud husband, and sends Ashley to model for Scarlet so Ashley can find out what’s going on. Scarlet talks about people not taking risks, and how she has difficulty distinguishing love for her husband from love of what he has done for her. This leads into another sexual number of two women modeling for Scarlet, both of them married to other men. While this touches on some conflict, it feels weirdly dated, as if the privilege accorded to women in heterosexual marriage is so great that it is worth living in the closet. Material wealth is conflated with heterosexism, as if women can never have economic power, or there must always be a power differential in a relationship. At least this is presented as a tragedy, of people living inauthentic lives for material comfort.

More friction, when Elliot gets cranky over Ashley trying to help out Jules. As punishment, Elliot tells Ashley to tell Jules to spank Ashley. Ashley proves to be a more assertive sub, demanding that if Elliot is going to punish her, he has to do it in person. Later, Dylan intrudes on Elliot’s date with Ashley. Elliot leaves Dylan bound and gagged in the turned-off sauna while he tops Ashley.

Even the background music sounds like the Fifty Shades soundtrack album.

The episode opens with Elliot giving Dylan a disciplinary spanking. I would argue that actual punishment has no place in a D/s relationship. If Dylan’s goal is to get Elliot to pay more attention to her, she’s succeeding. Elliot cuts off the punishment when he realizes Dylan is topping him from the bottom, and does the only really effective punishment: sending her away.

Elliot shows Ashley around his dungeon. Compared to Ana Steele, Ashley’s pretty good at stating her limits. E.g. when Elliot introduces the idea of mummification, she brings up her claustrophobia. Justin Berti as Elliot still comes across as a better dominant than Jamie Dornan as Christian Grey, though he doesn’t establish a safeword until *after* he has her bound to a cross. Ashlynn Yennie reminds me not so much of Dakota Johnson as Ana Steele as of Kristen Stewart as Bela Swan; all introverted moodiness. Though Ashley is supposed to be the protagonist, she’s frustratingly passive and withdrawn.

Jules breaks in to one of Scarlet’s photo sessions to yell at her. This scene is mainly interesting for the hint of full frontal nudity in the African-American male model in the background. I’m not sure what kind of rule this show is operating on. Is a penis okay if it is presented as part of nude modelling instead of in a sexual scene? Anyway, Jules tries to connect to Scarlet in a polyfidelity relationship, which means she will fuck Scarlet and her husband. I’m not sure why this subplot exists at all. This leads to an MFF threeway.

Dylan shows rank hypocrisy in criticizing Elliot about his “whores”, considering she procured most of them, and especially when Dylan dumps her and says he *pays* her to find him women, “to do the dirty work”. There’s some unpleasant racial subtext here, as Dylan’s job appears to be to bring Elliot women he wants, i.e. white women. Elliot rejects the one black woman Dylan brings. Dylan echoes the Negro maid in Story of O, who facilitates O’s submission but is not an object of desire herself. (Note also that the only penis we see is that of a black man.) Elliot finds Dylan too needy and predictable.

However, Dylan’s jealousy, combined with Elliot’s dickishness, threatens paradise. Dylan digs out all the video files of Elliot’s “conquests” and threatens blackmail. I’m not at all assured about how this story is going, and I hope they don’t take the easy way out of making Dylan the villainous woman scorned. It’s Elliot treating her like dirt that’s the real problem.