While trying to learn more about the Orientalist slave paintings I’ve been posting on Tumblr and Pinterest, I found there are a lot of these kinds of paintings. There’s the slave market set on Flickr, the entire Orientalism tag at Onok-Art, and a collection of slave market paintings on Tanos.org.uk.

Note that these paintings are nearly all from the 19th and early 20th centuries. They say far more about the people who created and viewed them than the people they ostensibly depict. (Talos has images from other periods that suggest a cultural continuity of this theme, which I will address in another post.)

The collections of these paintings conflate at least three overlapping genres or narrative frames.

The first is the harem scene, in which the women are generally lounging around in diaphanous silks inside a harem, looking decorative and sexy. Women in harems weren’t necessarily slaves, but could also be wives, concubines or servants. These paintings blur the distinction with similar ideas of captivity and sexual availability.

The term odalisque, which is a French bastardization of the Turkish odalik, meaning “chambermaid”, is used by Europeans as a catch-all term for women in harems.

The second is the slave market scene, in which the women are on display in the outdoors, either out in the wild or in a city. You could subdivide this genre into the classical, set during ancient Rome or Greece, and the Oriental, set in “the Orient”, which dislocates it from any real world time or place. The sign on the woman in the painting below says she is a virgin and 21 years old.

There’s a motif common to these two sub-genres: the unveiling. The painting depicts the moment of a man removing the veil or robe from the woman and displaying her nude body to the onlooker in the painting and of course the viewer of the painting itself. In the example below, the slave merchant is directly facing and beckoning to the viewer. 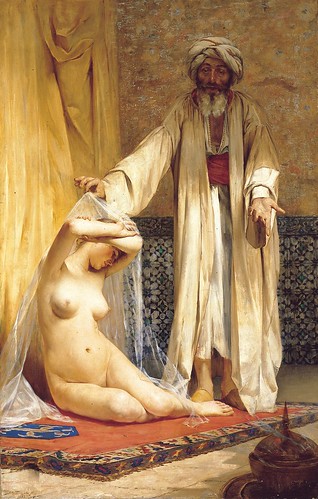 The third is the capture scene, with the half-naked woman being carried off by men, often on horseback. 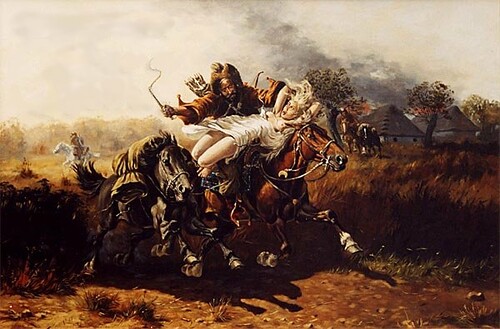 Another example shows a semi-nude, bound woman next to a pile of looted goods, quite clearly showing her as spoils of war. 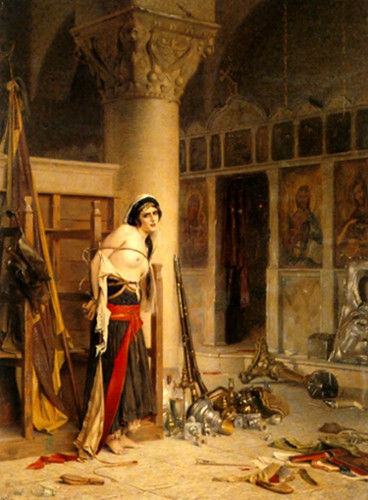 Another thing you notice after looking at a lot of these paintings is that there’s a clear racial hierarchy. The women on display are almost always fair skinned, and if they are juxtaposed to a woman of darker skin, the latter is usually in a subordinate position. There are a few in which the dark-skinned woman is the centre of attention, but most of these paintings insist that the white woman is highly desirable to the non-white man, far more so than the non-white woman, if she is visible at all. 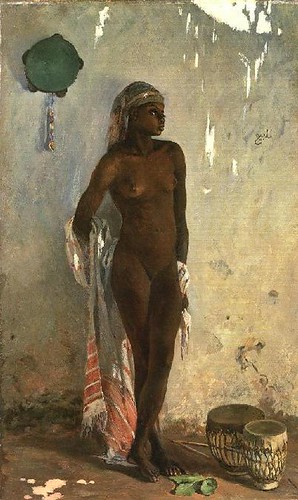 Negress with tamborean, by Frank Buchser

I should also note that the interchangeability of paintings set in Classical times and paintings set in the Orient mean that we’re viewing something that has symbolic power independent of classical or orientalist discourses.