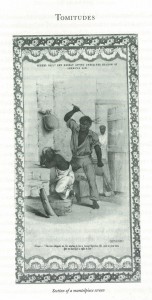 The man stands over her, legs spread, his crotch close to her, captured in the moment before a downward swing, jaw tight and eyes focused.

Most curiously, there is eye contact between the two. The woman turns and looks backwards over her shoulder at the man. As I mentioned earlier in discussing the “Virginian Luxuries” image, both of the couples in that image were in eye contact. This suggests a relationship between the two, and perhaps subtexts of betrayed intimacy.

The upper caption reads (in all capitals), “Scenes daily and hourly acting under the shadow of American law.” This is an unfortunate choice of words, carrying connotations of an exhibition with a regular schedule.

George – “She was whipped, sir, for wanting to live a decent Christian life, such as your laws give no slave girl a right to live.”

The excerpt above from George describing to Mr. Wilson the fate of his older sister, which puts an interesting angle on the third person observing in the picture. Instead of Simon Legree or a suchlike person, the observer could be young George, witnessing a Freudian primal scene that must have been pretty common back then.

What’s even more interesting is that this image was on a mantelpiece screen, something you’d have in your house where everybody could see it, not a book you could tuck away and view privately.

Addendum: This image came from the 1852 Clarke edition of Uncle Tom’s Cabin, published in London, captioned, “Scenes Daily and Hourly Acting under the Shadow of American Law”. See Slaves Waiting For Sale by Maurie D. McInnis, U. Chicago Press, 2011, pg. 53