Later, Michael and Don goes to a client meeting. After the client agrees to their campaign for women’s footwear, Michael launches into a Cinderella-based scenario of a woman fleeing a castle late at night, alone on a dark street, seeing a man in the distance, who may be her murderer or her rescuer. “She wants to be caught,” he says finally. The client changes his mind and wants to go with the Cinderella idea.

Michael’s Gothic fantasy seems pretty clearly inspired by his glimpse of the photos from the Speck murders. You could see this as Michael realizing the power of the woman-in-danger scenario, its ability to get and keep people’s attention. However, he does alter the scenario, making the man Cinderella sees ambivalent. (Remember also that PD, the founder and creator of Insex.com as documented in Graphic Sexual Horror, said he was inspired by crime scene photographs.)

In another plotline, Don Draper struggles with a bad cold and a chance encounter with an ex-lover, Andrea, in front of his new wife, Megan. Don pushes Andrea away and tells Megan than it was years ago (though there are hints it may have been more recent, even during his new marriage.) After work, Don goes home alone to rest and (probably) hallucinates Andrea coming to his apartment. He pushes her out again, but she comes back again, and they have sex. Again, this is a rewriting of a real-life incident into fantasy. 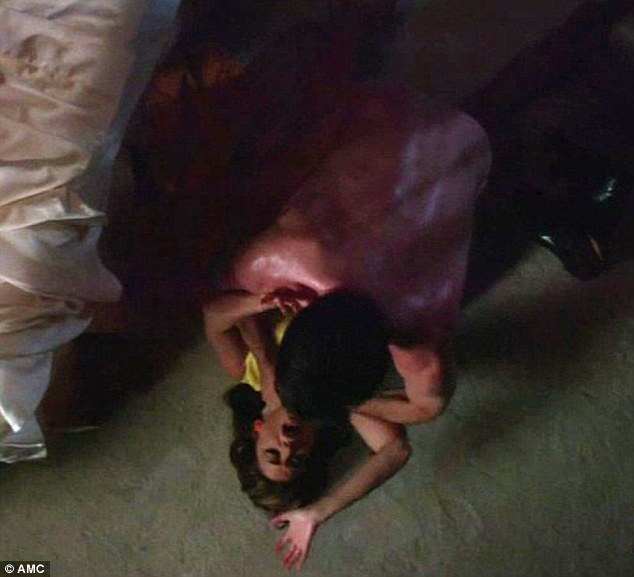 Don’s fever dream culminates when, after Andrea talks about getting sex from him in a proprietary way, he grabs her, furiously strangles her to death, then shoves her under his bed, just one hand and one foot (with one shoe) still visible. Like a lot of fantasies, this is an attempt to have it both ways. Don is dealing with his own conflict between his past (or not so past) infidelities and his attempt to be a better husband and father with Megan and his kids, id versus superego. Early in this sequence, he puts up a clear barrier between himself and Andrea, but she keeps coming back to him in his mind, and his desperation to control her (and by extension himself) drives him to fantasize about murdering her. Her sexual aggression in the fantasy at first absolves him from guilt and responsibility (in effect, a kind of “rape” fantasy), but later when she says he’ll always stray, he can’t sustain the fantasy, and flips into rage. Meanwhile, Don’s early teenage daughter Sally is also curious and troubled about the Speck murders. Left alone overnight with her step-grandmother, Sally tries to have a conversation about this incident. Her step-grandmother, who’s staying up late with a kitchen knife handy, spins out a bizarre “she was asking for it” scenario about the murder, talking about the student nurses with their “short uniforms” and how they opened a door for a “handsome man”, “maybe they knew him, maybe they didn’t”. The older woman also mentions that her own father abused her and says it was good to her. Likewise, here’s a rewriting of the story, into one of failed seduction.

Sally’s plotline ends with her taking one of her step-grandmother’s Seconals and sleeping under the couch.

Again, I’m reminded to Anna Freud’s account of how a glimpse of a book about medieval knights became a framing element for her pre-existing beating fantasies, a scenario that allowed the unconscious to become conscious in a distorted way. Michael, Don and the step-grandmother all take incidents of violence against women and spin them into narratives for their own purposes: selling shoes, struggling with personal angels and demons, processing past abuse with a combination of slut shaming and masochistic fantasy.

The other plotline in this episode concerns Joan’s Army doctor husband, Greg, coming home from his tour in Vietnam. Far from being traumatized by war, Greg actually volunteered to go back, as he enjoys the responsibility and respect that comes with his commission. Whatever good will Joan had for Greg rapidly runs out, and she finally throws him out, after quietly telling him “You’re not a good man.”

This is as close as Joan has ever come to directly acknowledging Greg’s date-rape from a few seasons ago, set off by Greg hearing about Joan’s prior relationship with her boss. Like Richardson’s Clarissa refusing Lovelace’s post-rape offer of marriage, Joan puts her foot down and calls it like it is, or as close as possible for a woman in 1966: this wasn’t seduction, this wasn’t a bad night, or even a mistake, it was rape. Joan, always a realist and pragmatist, doesn’t sweep it under the rug or sugar coat it with fantasy.

Joan, unlike Peggy, was born a little too early to operate professionally in the workplace, and instead uses a combination of seduction and smarts, which unfortunately only got her as far as the glass ceiling. After being her boss’ “best piece of ass I’ve ever had”, she marries a guy who is not only an abusive prick but a professional dud. Joan, however, does not fetishize the inequality of her life. She suffers, but she does not suffer for anybody. Whatever Joan is, she’s not a masochist.