A quick sampling of the other posts on the A Carrefour Etrange blog: 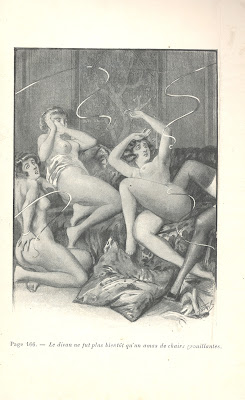 L’Étrange aventure de Miss Alice Simpson by Jean Bustarès, from 1922. No word on the story, but the pictures seem strongly on femsub and whipping. Illustrations by Gaston Smit alias Georges Topfer. 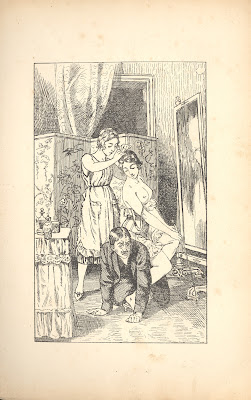 La Comtesse au Fouet (The Countess of Whips) is more of a mixed bag, with both femsub and malesub. Illustrations by Martin van Maele. Originally published 1906. 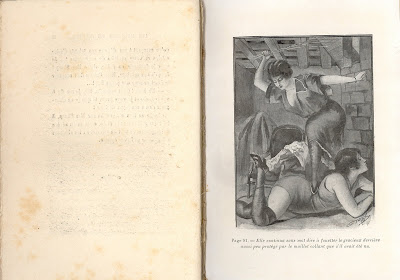 Petticoated.com has a few more images and excerpts from Photo Bits.

I have been enclasped in the torture of corsets of the finest make and build, oh, my diary, and every day my waist has been slowly but surely diminished under the eye of the tyrant, whilst she has sat in semi-regal state and watched her servile maids do her bidding. I have been clad in the silkiest and most costly of underwear, laced, flounced and beribboned, and splendid frocks above all, of silk and satin. I have been mounted on boots and shoes, with heels ascending slowly day by day, and my hands and arms have been imprisoned in the longest and tightest of gloves: the adjustment of a single pair has sometimes taken as long as fifteen minutes. With my waist laced in so mercilessly that I cannot bend, with heels inches high, with fingers stiffened with the bondage of kid, with “hobble garters” worn in the house to educate and control my already stilted walk, the helplessness of my position breeds a spirit of resignation. My hair is growing under a long and exquisitely curled and coiffured flaxen wig, my complexion is a work of art, and my ears have been pierced to admit of the wearing of long and heavy diamond ear-rings. As a boy, I am fifteen; the mirror reflects an over-dressed “flapper” of thirteen who is being attired out of all proportion to her age.

I get the distinct impression that transvestite/fetish fashion has a way of looking backward. The illustration at the top of this post shows a woman with an S-curve side profile, which is a distinctly Victorian element, though the maids are dressed in early 20th century styles.

I’ve finally made my way through the two volume set of John Willie’s Bizarre fetish magazine, and one of the things I noticed is the backwards looking tendency in dress and style. Even though written in the 1950s, there’s a lot of reference to the Victorian era of corsets and the like. Puzzling, considering that most of Bizarre’s readership would have been born well after that period. Is this some kind of mother fixation, i.e. men fixating on the garments they would have glimpsed their mothers wearing, or a preference for a bygone era of extreme gender dimorphism and extravagance in dress, over pared down, relatively androgynous fashion?

People make a lot of the fashion in AMC’s drama Mad Men, set in an ad agency in the early 1960s. The strong division between the sexes is obvious in the clothing: suits with slim-leg trousers and hats for the men, dresses, girdles and bullet bras for the women. It certainly makes for striking visuals. Secrets in Lace sells an entire clothing line of 50s/60s retro fashion and particularly lingerie.

So, when does a particular garment become fetishized? In 30 years or so, will there be a pornographic trope of, say, yoga pants? 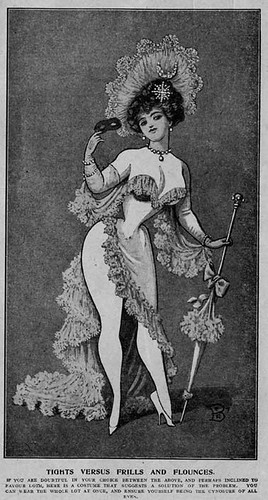 I have a few 1930s-40s copies of London Life magazine, but I am still looking for Photo Bits, another pre-WWII fetishistic magazine. Debra Hyde has a few scans on Flickr.

But when I came across a copy of a 1911 Photo Bits, our consistency really hit home. Here was an early 20th-century British relic that featured — what else! — items on corsetry, female impersonation, and extreme shoes, even headlining the latter as “the cult of the heel.” That’s very similar to the tamer sections of Willie’s Bizarre, isn’t it?

Photo Bits was considered an early girlie mag, a publication that tried to straddle the mores of the Victorian era even as the world move onward. The playful bathing beauties on its cover were eye-catching and tantalizing for its day and its headline about kleptomania almost yells “women inside!” Still, if not for the fact that Photo Bits makes an appearance in Leopold Bloom’s thoughts in James Joyce’s Ulysses, I’d be hard pressed to think of the publication as edgy. But there you have it. 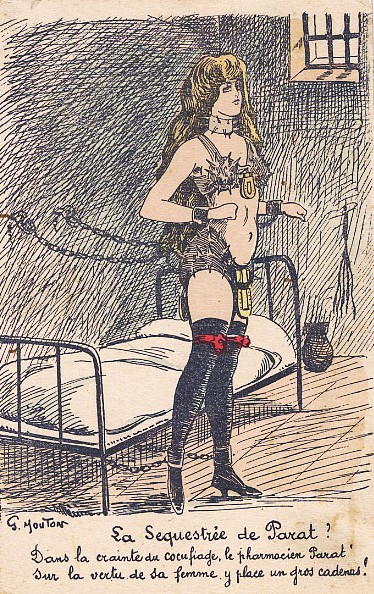 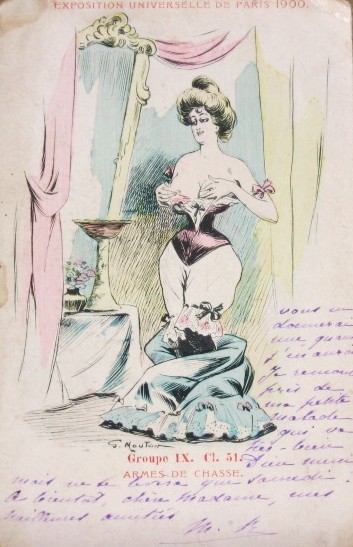 Fetish Pop Culture has a selection of spanking illustrations by Louis Malteste.