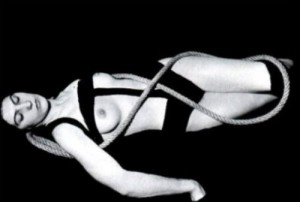 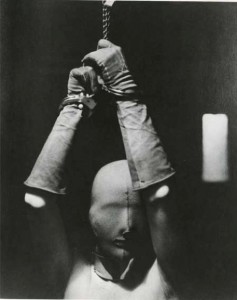 Much like in Rousseau’s Confessions, Man Ray described a childhood experience of corporal punishment in his autobiography.

My interests embraced, besides painting, human anatomy, both male and female; ballistics and mechanics in general. For the first, I used my brother, two younger sisters, and casual playmates as guinea pigs. One outraged little girl complained to her mother and I received a thrashing, which I almost enjoyed. […] Was I a budding sadist or masochist? [Pg.62]

His biography includes other, somewhat disturbing conflations of sex and violence, not to mention a gigantic ego. He describes an encounter with his first wife, Adon Lacroix, after she has left him for another man:

The contact of Donna’s body aroused my old desires and I took her, brutally. She relaxed and smiled at me through her tear-stained face. She looked radiant. [Pg.62]

Another encounter with his first wife:

I pulled out my belt and began lashing her. She fell on her face moaning; I continued striking her back a number of times, then stopped and told her to explain the marks to Luis [her lover]. [Pg.65]

Man Ray made a strong connection between artistic prowess and masculine prowess, specifically power over women; the bohemian machismo. Naturally, when women defied him, he didn’t take it well. When his lover/model/protege, model and photographer Lee Miller, left him, he took a self-portrait surrounded by several instruments of suicide. He later incorporated images of her disembodied lips and eyes into his artworks.

Mileaf says that, much like Severin at the end of Venus in Furs, Man Ray chose to be a sadist because he failed as a masochist. [Pg.75] 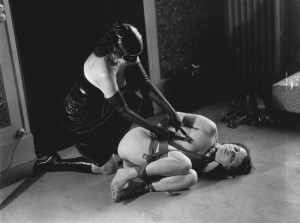 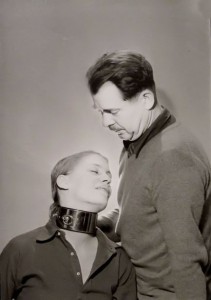 Some of Man Ray’s sadomasochistic photos were collaborations with William Seabrook, an adventurer, occultist, journalist and writer who moved in the same bohemian circles. Man Ray’s interest in sadomasochism was more theoretical, while Seabrook’s was practical.

Seabrook was an interesting case, one of the few well-documented cases of kinky people in the post-Victorian, pre-WWII period. (TE Lawrence is another example, one worthy of a post.) His book The Magic Island (1929), about Voudou in Haiti, is credited with introducing the term “zombie” to the larger world. He also claimed to have eaten human flesh, obtained from the corpse of a healthy young man killed in an accident, and prepared as a stew; he said it tasted like veal.

Seabrook’s penchant for bondage was well known, and both he and his ex-wife, writer Marjorie Worthington, were frank about in in his autobiography and her memoir.

My propensity for putting chains on ladies was common knowledge. I’d ceased making any effort to conceal it– nor would there have been any particular point in doing so. It was a sexual abnormality like many another, and in a decadent society in which the more unusual forms of twisted sex, when they occurred, went unhindered and condoned, my friends, acquaintances, servants and the countryside… were generally tolerant, sometimes sorry for me, sometimes bored, sometimes amused. [Pg.76]

Worthington described evenings in which Seabrook would invite distinguished guests to his home and have a hired woman appear in bondage during cocktails. Seabrook was exercising the privilege of being a wealthy foreigner in France.

Starting around 1929, Seabrook commissioned Man Ray to make a series of photographs of women in bondage. One of the notes from Seabrook to the photographer:

I’ve got some additional tentative ideas, to go along with the black mask; A black priest’s robe and priest’s shovel hat- straight line such as one sees priest’s [sic] wear in the street. Concealed beneath it a wasp-waist hour-glass corset finished either in some glittering fabric that looks like polished steel, or in black leather-like material to match the mask. Also boots or slippers with fantastically high heels. So if you will be thinking of where you might send me to order these various things, in addition to the two we spoke of yesterday, I will be much obliged. Unless I year from you to the contrary, I’ll bring the young woman by your studio for a little while around five thirty this afternoon. [Pg.77]

You couldn’t just buy such things off the rack back then; you had to cobble it together and improvise, or have it custom made.

Man Ray wrote a letter to Worthington about Seabrook in 1941:

Some acquaintances the other day repeated a legend about me that I had rushed down to Toulon on a wire from Willie to film his doings in an abandoned castle, with all the inferences that went along, and I could only reply that I wish it were true! Even the story; that I had designed special jewelry for you, is known, and I have now the reputation of jewelry designer amongst my other accomplishments.[Pg.78]

Man Ray actually did help Seabrook fabricate a silver metal collar to be worn by Worthington. It was high and stiff enough to make breathing or swallowing difficult, and Seabrook enjoyed watching her when he took her out for dinner while she wore it.

Some of the bondage pictures attributed to Man Ray may have actually been taken by Jacques-Andre Boiffard, Man Ray’s darkroom assistant. [Pg.79]

One afternoon he [Seabrook] phoned me asking me to do him a favor and spend the evening from eight to twelve in his studio … Seabrook had just received the press, who had interviewed him; had been invited, with his charming wife, to a banquet in his honor that night. Would I sit in the studio until his return and watch over a girl he had chained to the newel of the staircase? [Pg.81]

Man Ray accepted, along with Lee Miller, though he let the woman eat dinner at the table instead of from a plate on the floor, against Seabrook’s instructions.

When we left, [Lee Miller] told me she had met a man who liked to whip women– it was nothing new for her. Nor for me either, I thought; I had whipped women a couple of times, but not from any perverse motives. [Pg.81]

Man Ray seemed to prefer his sadism to be spontaneous outbursts of passion, not the meticulously planned, “perverse” scenarios of Seabrook. He also apparently didn’t like Miller appearing in such photos, but that was probably just basic jealousy.

Lee Miller, a model and photographer, was one of those rare women in bohemian communities who refused the status of girlfriend/muse and thought the creed of free love actually meant something for women as well as men. One anecdote claimed that she and a female friend had tricked a military officer with a habit of abusing women into bondage, and exacted revenge.

I hope to track down more material on Seabrook and Miller.