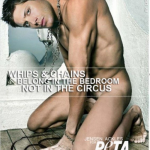 To whom it may concern:

On April 25, 2013, I received an email informing me that one of the images in my Pinterest account had been removed. The explanation was, “The reason is, it looks like the pin may have had nudity on it.”

The image in question was created and distributed by PETA (People for the Ethical Treatment of Animals) and features actor Jensen Ackles nude and kneeling in such a way that his arms and hands obscure his genitals, wearing chains and with a whip on the floor. The copy reads,  “Whips and chains belong in the bedroom, not in the circus.”

PETA has a long history of using sexually suggestive or explicit imagery in ads and publicity stunts to advance its animal rights cause, though many have questioned the efficacy of this tactic. I chose this image to illustrate PETA’s use of sadomasochistic imagery, part of a recurring trend of sadomasochistic imagery being used in persuasive media such as advertising and propaganda. This is part of my historical research.

I am at a loss as to why this particular image in question was removed. The only way it differs in degree or kind from many other images on Pinterest is that it features a nude male in a vulnerable position. Am I to understand that an unclothed man is somehow more nude, or the wrong kind of nude, compared to an unclothed woman? Even if the people are posed in such a way that their genitals are not visible?

I understand the necessity of enforcing rules regarding sexually explicit imagery on a service such as Pinterest. However, I do not understand the logic of this particular instance of enforcement, and I do not consider this removal to be just or fair or consistent with the content of Pinterest.

Please explain to me why this particular image is not permitted. I have attached a copy.