Clarisse Thorn asked me to participate in a Blog Hop in order to intro­duce new authors to new read­ers. If you’ve come here from the link posted on Richard’s blog, wel­come! If you’re a reg­u­lar reader of mine or came upon my blog by chance, I’m about to talk about my upcoming projects and then link you to some other writers.

Now for the questions!

What is the work­ing title of your next book?

Originally it was Beauty in Darkness, inspired by a Patrick Califia quote. It was also the name of the first version of this blog, which didn’t help my SEO. At some point, I decided that sounded a little too much like a mediocre vampire novel, and didn’t really have a title for a while. Earlier this year, I rebooted this blog with a new site and a new domain name.

After speaking with a book editor earlier this year, I revised my thinking and dubbed the project The Obsidian Mirror. The key metaphor for the book was distorted reflections. We look at other societies and cultures as if in a dark mirror, reflecting back our own fantasies, sexual and otherwise. That’s how Christians see Muslims, Protestants see Catholics, whites see other races. Westerners created a pseudo-science of Orientalism to describe the Islamic world, which was at least 50 per cent fantasy. Those fantasies of eroticized slavery and polygamy say far more about Westerners desires than they do about actual life in Turkey or India. We project our disavowed desires onto other group, and recover them through “perverse” sexuality.

An alternate title is Pleasures of Hell, after William Blake’s visionary poem “The Marriage of Heaven and Hell” Blake postulated that heaven was stasis, and that hell is a realm of dynamic energy and change.

As I was walking among the fires of hell, delighted with the enjoyments of Genius; which to Angels look like torment and insanity.

Where did the idea come from for the book?

Toni Morrison, I think, said you should write the book you would love to read. Around the time I was just getting into the Scene in the early 1990s (all we had back then was email and USENET), I was studying Victorian history at university. One of the minor topics was the mention of the consensual master-slave relationship between barrister Arthur Munby and maid of all work Hannah Cullwick, which began when there were still real slaves in America. I file that away in my head. 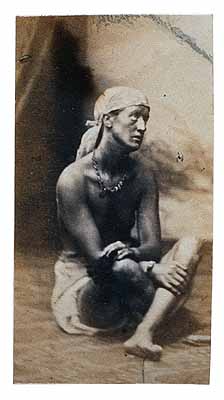 Hannah Cullwick, c.1862. Note the locking chain collar around her neck and the leather strap around her wrist. Also note Arthur Munby’s foot in the lower right corner.

Over the next few years of my career in the Scene, I heard a lot of half baked theories about the origins of the kink culture (the ancient slave trading houses myth) and the same few names being checked over and over again. There was a dearth of hard information and also a lack of a historical narrative of sadomasochism to put the information in context.

That’s what prompted me to start researching and writing about a history of consensual sadomasochism, documented in this blog.  Just accumulating data is not enough. I have to develop a theory of sadomasochism, what it is and isn’t, where and when it came from. The more I learned, the more certain I was there was an untold tale, and that it had to be told.

What genre does your book fall under?

I’m going to say “popular social history”. It’s intended to be for a general readership with an interest in history, not only academics or kinky people. I definitely don’t want to fill it with critical theory jargon, though some of that will inevitably leak in.

Which actors would you choose to play your char­ac­ters in a movie ren­di­tion?

Not applicable. Though I can think of several real life stories that could be adapted into historical dramas. There have been at least a couple of short films based on the Munby-Cullwick relationship, and I think it could be the basis for an interesting feature film. I wouldn’t want it to be too Hollywood.

What is the one-sentence syn­op­sis of your book?

When we look at other cultures, other religions, we see as in a dark, distorted mirror, that reflects back our unacknowledged dreams.

Will your book be self-published or rep­re­sented by an agency?

Good question. The publishing industry is changing a lot these days. I’m considering turning the drafts of three chapters I completed into self-published ebooks through Amazon Kindle and the iBookStore, to get some exposure and maybe make a little cash.

One thing I’ve discovered is that the major ebook formats don’t handle footnotes or endnotes very well, so they’re currently ill-suited to non-fiction works with references. That does make self-publishing non-fiction more difficult.

How long did it take you to write the first draft of your man­u­script?

After starting in 2005, I’m still writing it. I only recently got into researching North African slavery of Europeans. I live in fear that the research project could continue infinitely.

What other books would you com­pare this to within your genre?

Who or what inspired you to write this book?

, were a big influence on me. I see Califia as the prototype of the kinky intellectual, and I think it is important that kink sexuality should be written about by the people in it, just as we need GLBTQ people to write about GLBTQ.

What else about your book might pique the reader’s inter­est?

This book isn’t just about kink, it’s about kinky people in history. There’s the consensual master-slave relationship between gentleman barrister Arthur Munby and his maid of all work, Hannah Cullwick. T.E. Lawrence wrote letters from an imaginary uncle, telling his friends how he was to be beaten. After Mrs. Beeton (the Victorian Martha Stewart) died, her husband Sam started publishing letters about flagellation, tightlace corsetry and forced crossdressing in The Englishwoman’s Domestic Magazine, next to the muffin recipes. The true story of the people who made the kink world is far more interesting than any mythical European slave trading secret society.

Here are the writ­ers whose work you can check out next:

ParaCathy, also known as Paragirl Cathy, is probably the best known person in the amputee devotion/pretender/wannabe community. She received a ton of hate mail after her public interview. The mere fact of her existence seems to arouse fear and hatred out of all proportion to her capacity to harm anyone, which suggests she means something important.

Mollena Williams, aka Perverted Negress, is the go-to girl when it comes to raceplay, and she has plenty more to say on other things kinky too.

Limpid Lech’s blog is full of great finds on the fringes of sexuality, especially where it rubs up against horror.