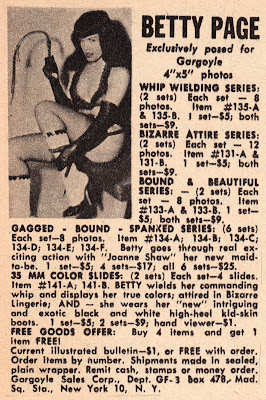 Vintage Sleaze has a fun tidbit of kink history. Sam Menning, an actor who also worked as a photographer, took fetish pics, including the great Betty Page.

Menning eventually became the “house” photographer of sorts for Gargoyle, a distributor of 4 x 5 nude photos with a fetish bent. Mind you, they were 1950’s photos of a fetish bent…which meant play-acting with rather dim and confused models being asked to look tough…dramatic to this day, but little more than lingerie ads with the models in black. Not MY cup of tea, but someone’s.

It turns out that Kefauver and his puritan goons had confused Sam Menning, photographer for Gargoyle Sales Corp, with Samuel Roth, publisher of Gargoyle Books. This mistake wasn’t revealed until Kefauver had Roth on the stand testifying.