This fascinating book is based on a series of Mahdavi’s visits from America to Iran between 2000 and 2007, which gave her an interesting longitudinal perspective of social change in Iran.

Mahdavi’s book explores a particular “thin slice” of Iranian society: young, urban, secular-minded, middle-class (or wishing to appear so), over-educated, under-employed, mobile (via cars and mobile phones), and exposed to the developed world via Internet and satellite TV. The men go clean-shaven and hair-gelled. The women wear tight-fighting mantos (coats) and headscarves that show their streaked hair, plus multiple layers of makeup. It’s a particular style of dress that has developed by dancing on the edge of Iran’s sartorial laws, under which a bare ankle, a three-quarter sleeve or a few centimetres of exposed hair could result in harassment, arrest or being whipped. Its also a statement against identifying with the ascetic look of morality police. They drive to house parties (no night clubs or other public venues), drink imported liquor, dance (completely forbidden) to Iranian-American hip-hop, and screw around, all the while looking over their shoulders.

Opposing them are the komite, or morality police. Back in the revolution, women put on body-obscuring chadors, men grew beards and stopped wearing shirts with collars, as rejections of Western influence. This was to create good Islamic citizens. “The Islamic Republic relies on the performance of proper Islamic rituals to produce believing Islamic citizens, and thus continues to attempt to enforce such rituals of Islamic ideology as proper Islamic rituals and comportment.” (Pg.8)

Mahdavi also quotes Roxanne Varzi: “the aim of the revolution was not to create faithful Muslim, but to create good Islamic citizens. The difference is that instead of concentrating on faith (which is expected to exist a priori) and intention, the regime concentrated on appearance and ideology–practice was emphasized over inner faith.” (Pg. 106) This resembles Foucault’s concept of bio-power, that the state must control all aspects of its citizens’ bodies to maintain military and economic readiness. Famously, the Ayatollah Khomeini said, “The Islamic revolution is not about fun, it is about morality; in fact, there is no fun to be had in the Islamic Republic.”

This battle, between morality and pleasure, is fought on a very small, personal scale, and particularly on the bodies of women. At the worst, morality police would stake out beauty salons with buckets of cockroaches and throw them at the feet of women customers. Punishments include whipping, cutting their lips with razor blades or forced marriage. There’s a strong undertone of class antagonism, as the sloppily dressed komite are often lower class, while middle-class women see chadors as making them look like maids or servants. (Pg.69) Lower-class women, in turn, dress up by substituting charcoal for mascara and hydrogen peroxide for hair bleach.

This intense monitoring and punishment creates a curious, partial levelling between men and women, gay and straight, public and private. In this society, everybody’s in the closet and on the down-low. Everybody has something to lose socially from their sexual activity. Everybody learns the tricks and dodges of living in this environment, the cycles of greater and lesser enforcement or how to explain the woman in your car or mask the liquor on your breath (eating cucumbers). Everybody knows that sex is completely separate from the realm of family and work; there’s not so much dating as casual hookups and group sex.

…I allowed Baback to take me to the party, which was held in a huge garden with beautiful hanging trees in each corner. As I walked in a bit farther, I noticed a large swimming pool, which had been drained. There seemed to be voices coming from the bottom of the pool. “Welcome to the jungle,” a young man said. He stripped me of my Islamic dress (which included my headscarf and manto) and led me further into what I was starting to think of as the hanging gardens of Babylon…. As we walked closer to the pool, I realized that a full-blown orgy was taking place inside it. As Babak took off his shirt and started to wade into the group of young people, I decided to walk around the pool and perch myself on the diving board. A million questions raced through my head: Who are all of these people? Are they married? Are they using protection? It doesn’t look like it, so are they worried about disease? …. A group of five men and women huddled together below me. I couldn’t tell who was kissing whom, and I couldn’t see how much oral or penetrative sex was taking place, but it seemed that most of the people were completely naked, and from the movements I could see, it looked as though half were having some kind of sex.

The dark side to this is substance-abuse, STIs and unwanted pregnancies, aggravated by an intensely moralistic society that discourages and even denies pre- or extra-marital sex. There’s a woeful ignorance of basic information about disease and conception among the people Mahdavi interviews. They think HIV only happens in prison, or that pulling out is the best way to avoid conception, or that “being sure” of your partner protects against AIDS. Women confuse the morning-after pill and hormonal birth control pills. Iran has one of the largest condom factories in the Middle East, but any condom you buy there is likely to be foreign-made and with instructions that aren’t in Persian.

Mahdavi says that it is too easy to view this as just Iranian youth enamored of Western materialism and hedonism. Many of the people she spoke with view their lifestyle as a public, political act against the regime. Iran’s policy is to instill virtue (or rather, the appearance of virtue) by regulation of personal appearance and behaviour, and the sexual subculture is a politicized resistance to this regime. If the civil-religious authority cares more about keeping women’s ankles covered than building a decent transit system, this is how the young people indicate their defiance. 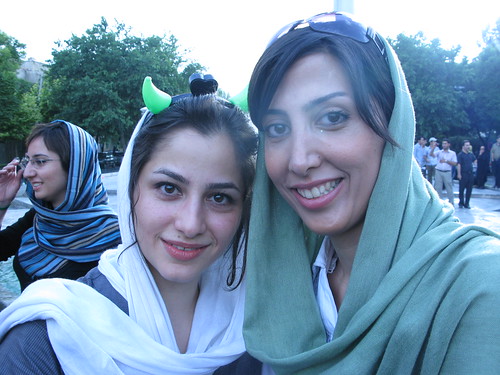 But in the developed West, is there still a fight to your right to party? I’d say a qualified “Yes.” For some people, it is much more of a fight than others. If you’re gay, or a POC, it is harder and more dangerous. The US has its own homegrown versions of morality police, like conservative Christians who threaten boycotts of hotels that book BDSM events, or the Repent Amarillo group that parked outside a Texas swing club and outed people by scanning and looking up license plates in real time. Fortunately, these people are fringe elements and present only a localized threat. There isn’t the kind of systematic, organized surveillance and harassment the Iranian youth have to live with and fight against.

In the developed world, the older command to be virtuous awkwardly coexists with the newer command to have fun (and to spend, spend, spend). At the level of signs, makeup, conspicuous consumption and nosejobs are signs of resistance in Iran. In the US, they are signs of conformity. Still, in the US, people who reject the physical signs of mainstream beauty are scorned and unofficially policed. And there are still people who flip out about women who are too public in their desires.