Petticoat Punishment Art has scans and excerpts of Facts and Fancies, a largely hand-made fetish magazine published in England in the early 1930s. 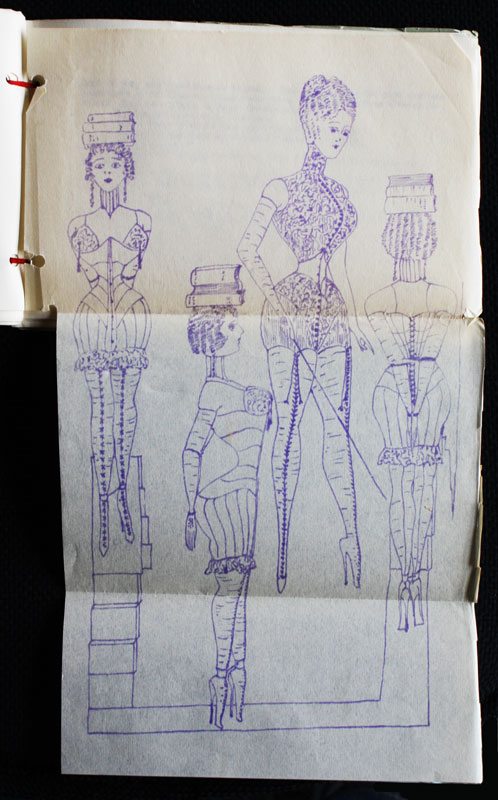 Facts and Fancies was assembled by hand with photos attached to some of the pages. It was published twice monthly on the 10th and the 21st in England (London?) from 1930 thru 1933, and was sold only by subscription. Its size was eventually 8×5 inches and the number of pages varied over its print run. The same publisher also printed some stories in the same format. F&F was contemporary with London Life but was enormously more extreme. It contained stories, letters, drawings and photographs on the general themes of cross dressing, extreme tight lacing, corporal punishment, boots, high heels and jewelry for both sexes

The content appears to be both letters and fiction. I speculate that the people who read this would have been small children at the tail end of the period when corsets were common wear, and it might have had something to do with early childhood recollections. I’m not sure whether the main topic was forced feminization fantasies, or the article I’ve linked to focused on that particular kink.

It’s also interesting that this particular publication seemed to be an amateur affair, sold via subscription. This suggests a fetishist subculture separate from commercial concerns, unlike the more mainstream London Life magazine, sold via retail.

The same site also has articles on other historical forced crossdressing media. One refers to French publishers in the interwar period, notably “Lord Kirodstock’s” 1908 Education Anglaise. This is likely a reference to the French stereotype of the English sadist. The French thought the English sexually deviant, and vice versa.

Another page discusses the history of Miss High Heels, possibly the archetypal forced feminization novel. The publishing history is unclear, with multiple piratings, translations, false publication dates and locations and various unauthorized sequels by other authors.