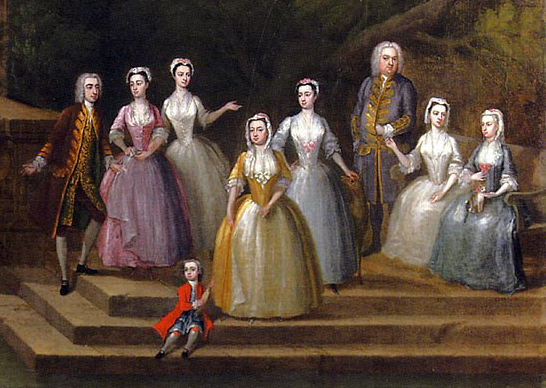 Stone, Lawrence. “Libertine Sexuality in Post-Restoration England: Group Sex and Flagellation among the Middling Sort in Norwich in 1706-07” Journal of the History of Sexuality, 1992, vol. 2, no.4, pp. 511-26

Self was a struggling businessman who was trying to get rid of his wife, Sarah, who spent his money and gave him gonorrhea. According to court documents, Sarah had a lot of sexual interest in other people. Samuel actually encouraged this, cultivating a relationship with John Atmeare, trying to get Sarah to cross the line into adultery so he could legally separate from her without alimony. The Selfs had to rent out part of their house to another couple, Jane and Robert Morris, who could easily observe the other half of the house through keyholes. The Selfs also had a spinster named Sarah Wells and a maid named Susan Warwick living with them.

Samuel finally “caught” Sarah and Atmeare in the act, and the ensuing court cases revealed the goings-on at the Self house. More common than the group sex and voyeurism was the flagellation. The most common pairing was Samuel putting Jane Morris over his knee in the kitchen or over the kitchen table or on her stomach on a bed upstairs, and using his hand or a birch rod. He also topped his wife, his maid and his houseguest. These were not private exchanges as there was almost always somebody watching, if not actively participating. There was femdom-femsub and femdom-malesub whipping too.

What’s also interesting is what didn’t happen, “such as oral or anal heterosexual sex; or [[male-male or female-female]] homosexuality; or unusual sexual positions, such as the woman on top (denounced as a subversion of hierarchy) or taken in the rear (denounced as being like animals).” None of the group seems to have any guilt or shame about their actions, suggesting they followed an extreme version of the pleasure-seeking materialism that was the new way of thinking at the time. John Locke’s An Essay Concerning Human Understanding had been published in 1690, and what would today be called ethical hedonism was advocated in many pornographic books in circulation after 1680 in England. It’s possible that, as a bookseller and bookbinder, Self had access to these. Meibom’s A Treatise on the Use of Flogging in Medicine and Venery was published in English in 1718, and there were probably copies circulating in England earlier.

Samuel Self was middle-class, barely, so he wasn’t born to aristocratic libertinage as practiced in royal courts. Furthermore, the Self menage confined its activities to private or semi-public settings (homes and shared homes), and to a small group of apparently consenting individuals. This is in sharp contrast to the actions of English rakes, who accosted women nonconsensually in public settings or non-domestic spaces like brothels. The earl of Rochestor’s idea of a fun afternoon with his mates was grabbing a woman on the way to market, stealing her butter and smearing it on a tree, then coming back, turning her upside down and then they “clapt the butter upon her breach.”

Self’s house was to the aggressive violence of rakehood as masquerades were to the cathartic uprising of medieval carnival; it offered a watered-down form of freedom and social inversion and pleasure seeking, domesticated and privatized to be compatible with the new bourgeois manners required by mercantile society.

We don’t know as much about the Self group as we do as Munby and Cullwick, but I can see the distant ancestors of modern swingers and kinksters in Self and company.