END_OF_DOCUMENT_TOKEN_TO_BE_REPLACED

The blog Of Love and Sex has reviewed A Lover’s Pinch.

A Lover’s Pinch is a deep dive that goes far beyond Leopold von Sacher-Masoch the Marquis de Sade. Admittedly, I wasn’t expected to read analyses of how religion, war, and slavery impacted our sexualities (and relevant imagery is included on some pages), but the author of this book is not afraid to broach those subjects.

I wouldn’t say that tricky subjects aren’t handled with care within these pages or that it’s un-PC, but the tone is sometimes decidedly frank. If you’re especially religious or still experience trauma from war or slavery, then A Lover’s Pinch might not be a book you wish to pick up (or you may wish to skip those specific chapters).

END_OF_DOCUMENT_TOKEN_TO_BE_REPLACED

Myths take on a life of their own, even if they don’t have any particular foundation. One of them is the idea that the violence of fascism and the Holocaust was the result of sadomasochism, or that the two phenomena have anything to do with each other. We’ve touched on the bit of glib folk-anthropology that Nazis were perverts before, but Moore analyzes more thoroughly than anybody else.

The sexual myths of modernity this book aims to unravel are those which concern masochism as a from of decadent gender subversion, sadism as a fascist return of the barbaric repressed, and current sadomasochism as a legacy of Nazism. They are myths in the sense that their proliferation has been built on poetic assertion, psychoanalytic speculation, and discursive repetition, rather than investigation, reflection or evidential grounding. [Pg.1]

Although no historians have ever attempted to produce creditable evidence that Nazi leaders were any more prone to what we might call sadomasochistic pleasures than any other political elite has been as wartime, this particular sexual myth has show surprising recurrence, persistence and capacity for re-articulation. Consequently, it has also proven to be fuel for a range of taboo sexual fantasies[….] [Pg.9-10]

END_OF_DOCUMENT_TOKEN_TO_BE_REPLACED

Brownmiller’s statement probably had a lot to do with the anti-SM strain of feminism in the late 1970s and early 1980s. In her view, masochism is merely a myth of patriarchy, an excuse for rape.

END_OF_DOCUMENT_TOKEN_TO_BE_REPLACED

Sexual Outsiders is primarily a guide for people in the helping professions (psychiatrists, psychologists, therapists and counsellors).

If you need to ask why this book is necessary, there is a problem of “therapy refugees”, people who have been unable to get therapy because they have been, or fear being, rejected for being kinky:

END_OF_DOCUMENT_TOKEN_TO_BE_REPLACED

Our Lives, Our History: Consensual Master/Slave Relationships from Ancient Times to the 21st Century

is now available at Amazon and at Barnes & Noble. You can also see some previews on the publisher’s page.

END_OF_DOCUMENT_TOKEN_TO_BE_REPLACED

After several years of my work as editor for Master Taino’s Training Academy, the anthology on the history of consensual Master/slave relationships is finally done and soon to be in print. The official launch will be at the 2016 Master-slave Conference on Labor Day Weekend.

The anthology includes essays from TammyJo Eckhart, Raven Kaldera, Laura Antoniou, Master Taino, slave david stein, Andrea Zanin and many others. I hope this will become a classic to go on shelves next to Leatherfolk, Different Loving, and Coming to Power. Amazon purchase link to come. 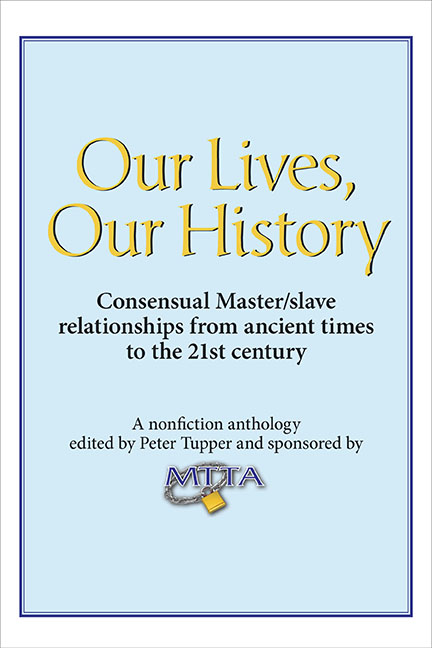 I’ve already gone into the history of the lesbian sex wars over BDSM. This post covers one of the major incidents in this struggle, the anthology Against Sadomasochism: a radical feminist analysis. It was published in 1982, the same year as the infamous Barnard Conference incident (in which anti-SM lesbian-feminists harassed and picketed a women’s sexuality conference, in which SM was just one of many topics discussed). Sado-masochism was described as, at worst, patriarchal false consciousness and, at best, an immature holdover from less enlightened times. Witness Vivienne Walker-Crawford’s “The Saga of Sadie O. Massey” [Pg.147], in which sadomasochism is discussed through the metaphor of a woman who is overly attached to a pair of thick wool socks. Instead of being a primitive form of psychological development, it was a primitive form of political consciousness.i See also “Smokers Protest Healthism” by “Paula Tiklicorrect”.[Pg. 164]