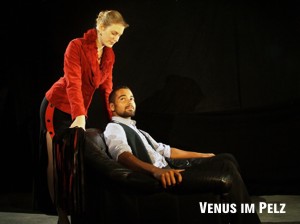 A friend in Rostock, Germany, is producing and directing a stage play based on Leopold von Sacher-Masoch’s classic (or it should be) novel of male submission and female domination, Venus in Furs, or Venus im Pelz.

The play stars Dino Gebauer as Severin and Meike Faust as Wanda, and directed by Florian Dedio. There are two shows, on September 11th and 15th.

Wish I was in Germany, and could understand German.

I’m glad to see this kind of project as I believe Sacher-Masoch is much neglected as a historical and literary figure, and his work deserves wider exposure and his life more academic study. For a man whose name was attached to an entire realm of human behavior and emotion, he is curiously forgotten. Freud’s two essays on masochism make no mention of Sacher-Masoch or his work